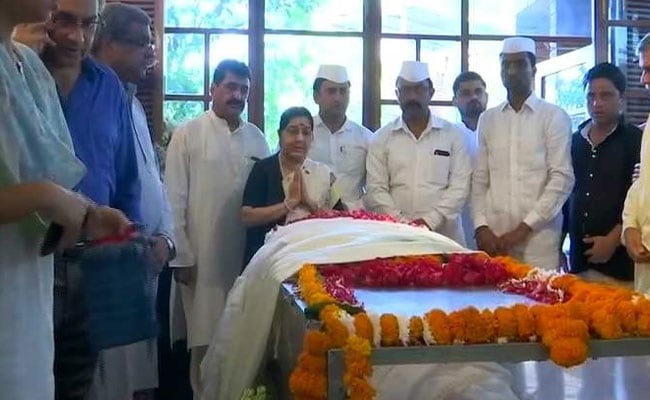 Former union minister Sushma Swaraj visited the residence of Sheila Dikshit today morning to pay her respects, after the veteran Congress leader died of a cardiac arrest at a city hospital yesterday evening. She was 81 years old.

Ms Swaraj had posted a message of condolence on social media yesterday as news of Ms Dikshit's death became public, writing that they were "opponents in politics but friends in personal life".

"I am sorry to know about the sudden demise of Sheila Dixit ji. We were opponents in politics but friends in personal life. She was a fine human being. #SheilaDixit," Ms Swaraj wrote.

I am sorry to know about the sudden demise of Sheila Dixit ji. We were opponents in politics but friends in personal life. She was a fine human being. #SheilaDixit

Congress leaders Rahul Gandhi and Priyanka Gandhi Vadra yesterday mourned more than the loss of a party leader." I'll miss her wise counsel, her sweet smile and the warmth with which she would hug me whenever we met," Priyanka Gandhi wrote.

"Deeply saddened by the demise of Sheila Dikshit-Ji. Blessed with a warm and affable personality, she made a noteworthy contribution to Delhi's development. Condolences to her family and supporters. Om Shanti," PM Modi tweeted with a picture of him and Ms Dikshit.

Sheila Dikshit was admitted to Fortis Escorts Hospital in Delhi in critical condition. She died at 3.55 pm on Saturday, her family members confirmed. The hospital, in a statement, said despite all resuscitative efforts, Sheila Dikshit died after a cardiac arrest.

Sheila Dikshit's last rites will be performed today. Her body is being kept at her residence for people to pay their respects. It will be taken to Congress headquarters later in the day, where it will be kept at for final respects before last rites at 2.30 pm at Nigam Bodh Ghat.

The Delhi government has declared a two-day period of state mourning.

Ms Dikshit had served as Delhi's chief minister for three consecutive terms between 1998 and 2013. She was succeeded by Aam Aadmi Party's Arvind Kejriwal. After her stint as Delhi chief minister, she was sworn in as Kerala's Governor in 2014, but resigned in just six months.