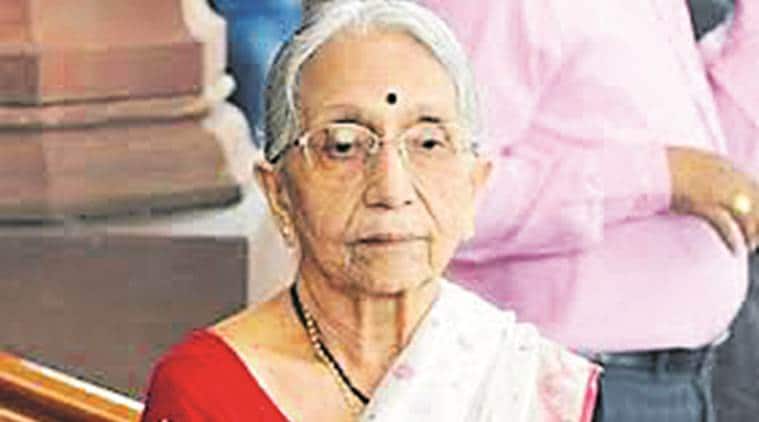 Krishna Bose joined politics in 1996 and won the Jadavpur Lok Sabha seat on a Congress ticket. In 1998 and 1999, she was re-elected as an MP on a TMC ticket.

Former TMC MP Krishna Bose, the niece-in-law of ‘Netaji’ Subhas Chandra Bose, died in Kolkata on Saturday morning. She was 89.

The three-time MP was suffering from heart-related ailments. She was admitted to a private hospital in east Kolkata on February 19 and died around 10:20 am Saturday.

Born on December 26, 1930, Bose was married to Sisir Kumar Bose, nephew of Subhas Chandra Bose. She had taught at City College in Kolkata for 40 years, where she headed the English department and later served as principal of the college. She also chaired the Council of the Netaji Research Bureau till death and headed the Parliamentary Standing Committee on External Affairs during her third stint as an MP.

Earlier, Banerjee tweeted, “I lost someone respected, loved & admired by me. Saddened & shocked to hear about the demise of Krishna Bose, ex-TMC MP & wife of freedom fighter Dr. Sisir Bose. Being a part of Netaji’s family, she was a revered social reformer, renowned poet & a courageous educationalist.”

Governor Jagdeep Dhankhar said, “Paid floral tributes at Netaji Bhawan to Krishna Bose member of parliament 11th, 12th and 13th Lok Sabha. A noble soul. Her passing is huge loss to society. Last met her at Navy Day Celebration on December 04. She was great source of inspiration to us. May her soul rest in peace.”

Congress leader in Lok Sabha Adhir Chowdhury said he had lost a sister in Bose.

“She was a famous politician, educationist, liberal and extremely confidant on democracy. It is hard to believe that Krishna Bose is no more. I lost my elder sister. Her death is an irreparable loss for the country,” he said.