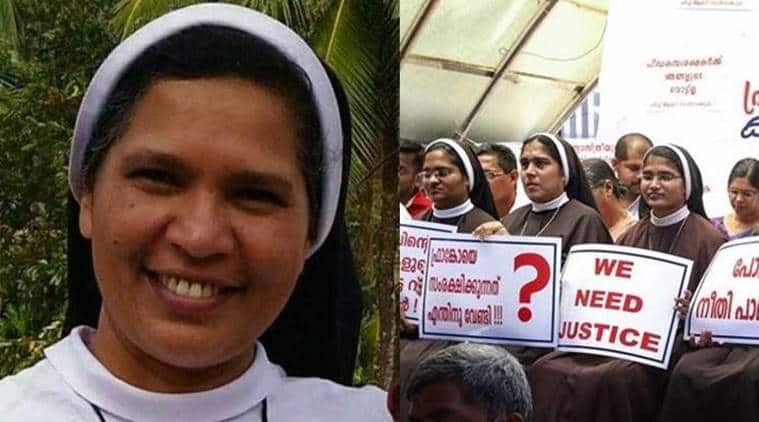 Sister Lucy Kalappura, who hit headlines for publicly protesting against rape-accused Catholic Bishop Franco Mulakkal last year and who was subsequently expelled from the Franciscan Clarist Congregation (FCC) for her actions, has filed a police complaint of wrongful confinement by the nuns at the convent. Sr Lucy continues to stay at an FCC convent in Wayanad though the congregation has asked her to leave the premises following her expulsion.

In her complaint early Monday morning, Sr Lucy said she discovered that the doors of the convent were locked from outside by other nuns purportedly to prevent her from attending Mass at a nearby church. Since Sr Lucy is at odds with other nuns at the convent, they do not mingle with each other. They pray and eat separately. Police officials at the Vellamunda station had to eventually visit the convent to open the lock.

Circle Inspector Santhosh confirmed that a case has been registered on the basis of Sr Lucy’s complaint under Section 342 of the Indian Penal Code for ‘wrongful confinement’. While the police are yet to question Sr Lucy about the incident as she teaches at a school, they spoke to a convent official who denied locking the nun on purpose.

“One of the convent officials claimed they locked it from outside and gave a spare key to another nun, who’s not been keeping well at the convent. They said they couldn’t leave the convent doors open, so they handed over the spare key to the ailing nun. We will have to probe this further,” Santhosh said.

“We have to talk to Sr Lucy about this and also to higher officials at the convent,” the official added.

The FCC officials have sent a letter to Sr Lucy’s mother, asking her to take her daughter back home since she has been relieved of all responsibilities as a nun in the congregation. Sr Lucy, meanwhile, has challenged her expulsion and sent a letter to the Vatican.

Besides participating in the protests against Bishop Franco Mulakkal and ‘showing the Church in bad light’, Sr Lucy has been accused of ‘writing in non-Christian newspapers and speaking on television debates against the Church’, buying and driving a car, publishing a book of poems and violating the dress code. Sr Lucy, in several interviews, has rubbished these allegations, stating that she has always stood on the side of truth.