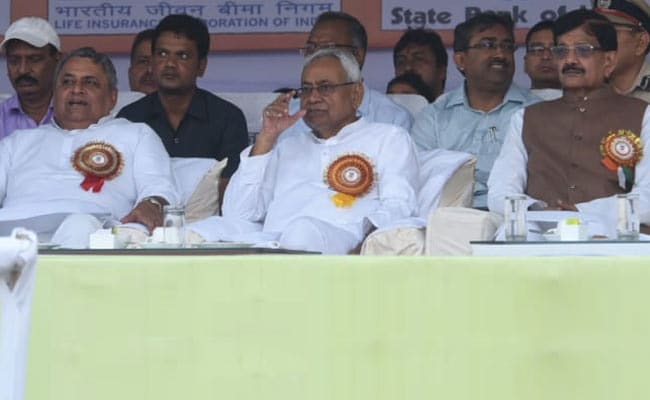 The sharp political differences within Bihar's ruling alliance - between Chief Minister Nitish Kumar and the BJP - became evident today as leaders of the BJP stayed away from a Dussehra function at Patna's Gandhi Maidan. Presence of political leaders across party lines in key social functions is traditional. But for the climactic Ravan Vadh of the Ram Leela held during Navratras, only the Chief Minister, the Speaker of the Bihar Assembly, Vijay Choudhari and Bihar Congress President Madan Mohan Jha were present for the function that was organised by a private committee.

It was the presence of all the invited BJP leaders in town that made it appear like a deliberate political move. Governor Phagu Chauhan, Deputy Chief Minister Sushil Modi, BJP legislators and Patna Mayor Sita Sahu were all present in the city, sources said.

A section of the BJP -- led by Union Minister Giriraj Singh -- has been at loggerheads with Nitish Kumar over the waterlogging in Patna since last month's unprecedented deluge. Sources in the party had indicated that the faction hopes to dislodge Nitish Kumar as the face of the NDA in the state.

Today, the organisers said they were taken by surprise by the absence of the BJP leaders. Kamal Nopani -- a member of the trust committee - said, "Everyone was invited and they used to come, but today no one turned up from BJP... we had no prior information that their absence was avoidable".

Union Minister and MP from Patna Saheb, Ravishankar Prasad, had announced two days ago that this year, he would not participate in any function and would spend time with the flood victims in the rural areas of his constituency. Among the others absent was the Governor, whose office had earlier said he was indisposed. Besides, Nitin Naveen, the local MLA from Bankipore, excused himself citing a family emergency and work in waterlogged areas.

But there has been no word from the Deputy Chief Minister Sushil Modi, who usually makes his position known through his tweets. Though his staff maintained that Mr Modi was in town, sources in the party claimed he was away in Karnataka.

Sushil Modi had earlier defended Nitish Kaumar against the attacks of party colleague Giriraj Singh. Earlier this week, as Mr Kumar was re-elected to the post of the party chief, Mr Modi, in a series of tweets, said it would "strengthen the NDA".

"Congratulations to Nitish Kumar for being elected national president of NDA ally Janata Dal United. He has given new heights to justice with development in Bihar and turned challenges of disaster into opportunities to serve the people," his tweet read.

Sources said Sushil Modi has been trying to dispel confusion about unity of NDA - initially saying Giriraj Singh's comments criticising the Chief Minister had no endorsement from the central leadership, and then with his tweets.

Mr Kumar has been the chief minister of the state for 14 years and was the undisputed leader of the NDA in the state even for this year's Lok Sabha elections. Sources said the now, with less than a year to go for the state election, a section of BJP leaders want the state's top post to come to the party.