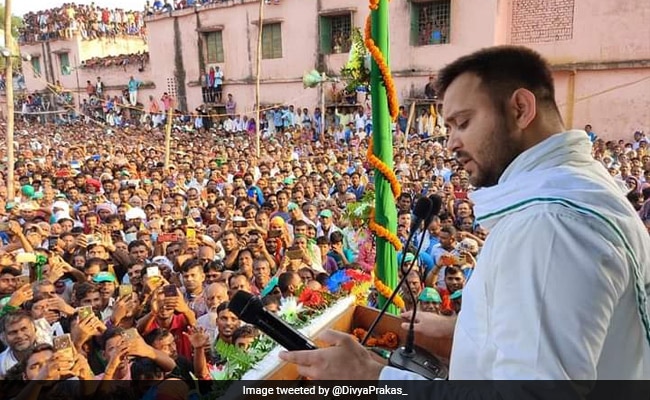 It has been 15 years yet Bihar has not got special status, says Tejashwi Yadav.

Tejashwi Yadav -- the former deputy of Bihar Chief Minister Nitish Kumar -- has targeted his former boss on his starkest failure over three terms: His inability to get special state status for Bihar, even when he is the ally of the BJP, which controls the Centre.

"People are very angry. It has been 15 years yet Bihar has not got special status. They have not been able to remove poverty, unemployment. People are extremely upset with this double engine government," the 30-year-old told today in the middle of the campaign trail.

He has been repeatedly raising the issue, mocking the Chief Minister over it. "US President Donald Trump will not come and accord that (special status)," he had said yesterday.

The 30-year-old, corruption charges against whom were the catalyst to the collapse of the Grand Alliance government, is the alliance's choice for the post of the Chief Minister.

Up against the four-time Chief Minister, Tejashwi Yadav appeared undaunted.

"Nitish Kumar lacks vision. There's nothing new," said the leader of the opposition, insisting that the state still suffers from the twin evils of poverty and unemployment.

"The rate of unemployment in Bihar is still 46.6 per cent, the highest in the country," he told. "Every second family has complaints here. On education, health, employment... people have huge anger and resentment against this double engine government," he added.

On Nitish Kumar's jibe that he lacks experience, Tejashwi Yadav retorted with a question. "Why did he make me a deputy Chief Minister? I was involved in a lot of development projects," he said, reeling off a list of his achievements.

He also said during his tenure as the minister for Road Construction, Building Constructions & Backward Class Development, he had managed to use up the Central funds to bring development in the state.

With Lalu Yadav accused in a string of corruption cases, it was his two sons – Tejashwi and Tej Pratap Yadav – who were rewarded with ministerial posts when the Grand Alliance of his Rashtriya Janata Dal, Nitish Kumar's Janata Dal United and the Congress came to power in 2015.

But it was Lalu Yadav who acted as the minister in charge, turning up unannounced in areas under his sons' control and issuing orders and punishments to officials.

On the biggest allegation of Nitish Kumar and the BJP – that Lalu Yadav and Rari Delhi had conducted a reign of fear, "Atank Raj", during their 15-year tenure – Tejashwi Yadav said, "We were ruling for 18 months. You can see NCRB data. When BJP-JDU came together, the NCRB figures have been alarming".

A BJP leader said there has been a drop in crime figures during the 18 months of the Grand Alliance rule because of prohibtion and Nitish Kumar heading the state Home Department.