UP CM Yogi Adityanath presents a photograph to US President Donald Trump and First Lady Melania Trump in Agra on Monday. (AP)

“The Taj Mahal inspires awe. A timeless testament to the rich and diverse beauty of Indian culture! Thank you, India,” US President Donald Trump wrote in the guest book after visiting the 17th Century mausoleum in Agra on Monday afternoon.

Earlier, the US President, First Lady Melania Trump, the President’s daughter and advisor Ivanka Trump and her husband Jared Kushner were received at Agra airport by Uttar Pradesh Chief Minister Yogi Adityanath and Governor Ananiben Patel. Beats of dhol and mridang greeted the Trump family as they stepped out of the airplane. There were performances of Mayur dance, Dhobia folk dance and Bamrasia for the US President. 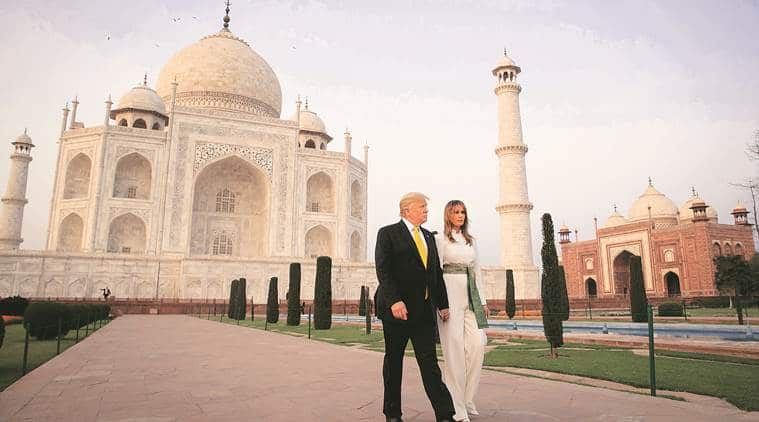 On the road from the airport to the Oberoi Amarvilas hotel, the high-profile guests were greeted by dance performances and billboards that read, “Welcome to the City of Love.”

Sixteen-year-old Manshita Kumar and her friends from Chitrakoot performed the Kolhai dance at a stage near the airport. “I saw Trump’s car and I hope he liked our performance. We have been practising for days and wanted to showcase the Adivasi culture. We are proud that the authorities chose us,” she said.

Melania Trump keeps it elegant in a Herve Pierre jumpsuit as she arrives in India; see pics

The president reached Taj Mahal in a golf car around 5 pm. After signing the guest book, Trump and Melania walked towards the mausoleum, stood in front of the Diana bench and posed for photographs. They were followed by Ivanka and Jared. 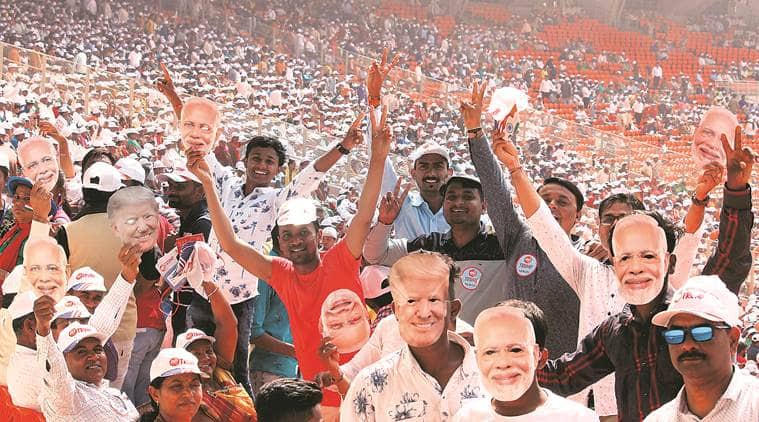 People sport Trump and Modi masks at the event in Ahmedabad on Monday. (Express photo by Javed Raja)

On their way back from the mausoleum, performers, women and children packed the streets to bid farewell to Trump. They held Indian and American flags. Anita Rajput, who works with the National Rural Livelihood Mission, said, “We are grateful that the officials chose us to welcome and see off Trump. We were called to sit around 1 pm, we waited for hours to see him. We were also given flags. It was fun, I saw his car.”

As part of the three-layer security in city, personnel from police and paramilitary forces were deployed at streets, markets and buildings. Some security personnel also stood atop buildings and houses. Shops and malls along the route the convoy took were shut for the day. President Donald Trump’s daughter and advisor Ivanka and her husband Jared Kushner at the stadium. (AP)

Arya Prasad (65), who owns a photo studio, said, “We had shut our shops but I wanted to see Trump. I have been living here for the last 30 years. I have seen Diana and (Pervez) Musharraf come here. I peeped through the door when his car passed and waved. I think he saw me as children were standing outside my studio and waving.”

The convoy reached Agra airport at 7 pm, where Chief Minister Adityanath gifted Trump a portrait of the Taj Mahal. The US President then left the city for Delhi.