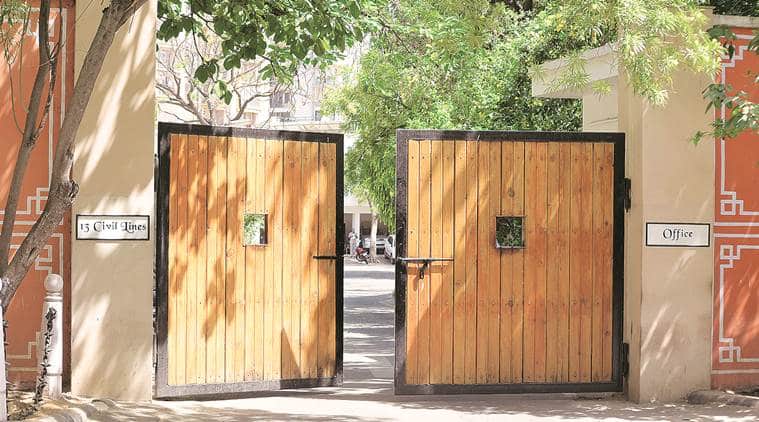 The bonhomie between Rajasthan Chief Minister Ashok Gehlot and his predecessor Vasundhara Raje, despite being political opponents, is known in the state’s political circles. But perhaps for the first time, thanks to a court case concerning a government bungalow to former Rajasthan chief ministers, it is out in the open.

More than four months since the Rajasthan High Court struck down the largesse, the Gehlot government seems to be doing its bit to help Raje retain her bungalow at the state capital’s upscale Civil Lines area.

On September 4 last year, the HC had held as “void” a 2017 amendment which provided former CMs — for the remainder of their lives — a government residence, a car, telephone and a staff of 10.

The Rajasthan Ministers’ Salaries (Amendment) Act, 2017, which amended the Rajasthan Ministers’ Salaries Act, 1956, was brought by the then Raje government. Within the amendment, Sections 7BB and 11(2) dealt with extending the facilities to former CMs, which the court found contrary to Article 14 of the Constitution, which guarantees equality before law.

The court observed that the state government’s move “reminded of George Orwell’s apocryphal portrayal of a distorted meaning of equality in his much-celebrated Animal Farm — that all animals are born equal but some are more equal than others”.

The Gehlot government, which assumed office in December 2018 after the Raje-led BJP’s defeat in the Assembly elections, filed a Special Leave Petition in Supreme Court against the HC order. Earlier this month, the apex court dismissed the petition, stating that “we see no reason to interfere in the matter.”

When the petition came up for hearing in HC on Monday, the government sought more time for compliance and told the court that it has served a notice to former CM Jagannath Pahadia to vacate his bungalow within 15 days, and that Raje has already surrendered the facilities extended to her, except the bungalow. “We have not taken any decision regarding her bungalow so far,” a top law official said.

The matter has now been listed for February 17.

Among the vocal critics of this bonhomie, BJP ally and Nagaur MP Hanuman Beniwal on Monday said, “Ashok Gehlotji, you are continuously insulting the people of Rajasthan, the Supreme Court, and the High Court. For a particular person you have mortgaged the spirit of administration and democracy. It is height of collusion and public’s patience is giving in.”