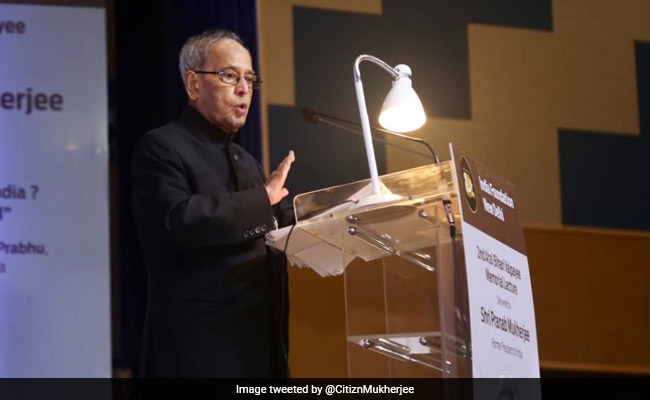 Pranab Mukherjee says heartening to see protesters' "assertion and belief in the Constitution".

Former President Pranab Mukherjee today underscored the importance of dissent in a democracy, and said the peaceful protests sweeping the country will rejuvenate democracy. " Consensus is the lifeblood of democracy. Democracy thrives on listening deliberating, discussing, arguing, even dissenting... Complacency enables authoritarian tendencies to gain ground," news agency Press Trust of India quoted him as saying.

Though the former President did not mention the contentious citizenship law or the National Register of Citizens against which a huge section of students and the civil society are up in arms, he said it was "heartening" to see the young assert faith in the Constitution.

Speaking at a function in Delhi today, "Citizen Mukherjee" as the former President has dubbed himself, said, "Indian democracy has been tested time and again," reported PTI.

"The last few months have witnessed people come out on the streets in large numbers, particularly the young, to voice out their views on issues which, in their opinion, are important," PTI quoted him as saying. "Their assertion and belief in the Constitution of India are particularly heartening to see," he said.

His words come amid the criticism the government has been facing following the police crackdown on the protesting students of Delhi's Jamia Millia Islamia. The opposition parties, including the Congress, have accused the government of ignoring students, who are the country's future and taking a hard line with them.

Union minister Amit Shah has repeatedly made it clear that the Citizenship Amendment Act will not be withdrawn, "no matter who protests".

The 83-year-old former president, who handed the country's highest post to President Ram Nath Kovind in July 2017, has never shied away from making his views known on contentious issues.

Several times during his presidency, he had drawn the nation's attention to the rising instances of violence, highlighting need to respect the core values of the nation and the democratic institutions. He had weighed in on the debate on free speech and nationalism and expressed reservations when an ordinance or executive order was brought to him four times.