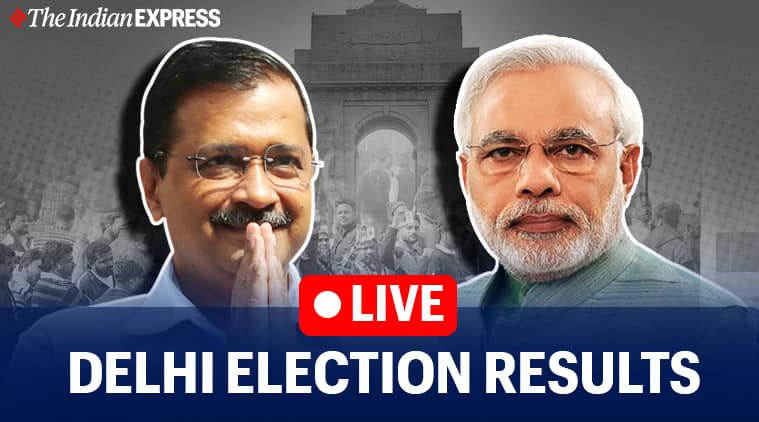 All the exit polls have predicted a comfortable win for Arvind Kejriwal’s AAP.

Delhi Election Results 2020 LIVE Updates: Arvind Kejriwal is set to return as the Chief Minister of Delhi for the third consecutive time as his Aam Aadmi Party is emerging as a clear winner in the Delhi Assembly polls. After initial hiccups, Atishi won the Kalkaji seat, while Manish Sisodia secured the Patparganj seat. Thanking Delhi, Atishi said, “People have voted for the agenda of development.” While Kejriwal is ahead in the New Delhi seat, AAP’s Amanatullah Khan has picked up a significant lead in Okhla, the hotbed of anti-CAA protests

BJP, whose campaign was focussed on Shaheen Bagh and protests against the new citizenship law, has made gains in the capital. Up from 2015’s 3 seats, the party is leading in 8 seats currently. In many seats, the margins are very thin and the leads are switching over to both sides. The Congress, which was once a powerful party in the capital, is heading towards another rout as it has failed to manage a lead in a single seat. Now the party seems headed for another five years without even a single MLA in Delhi.

Even as the counting was underway, Delhi BJP chief Manoj Tiwari exuded confidence of winning the elections with a comfortable victory. “I am confident that it will be a good day for BJP. We are coming to power in Delhi today. Don’t be surprised if we win 55 seats,” he told news agency ANI. Sisodia, on the other hand, was also sure of AAP’s win.