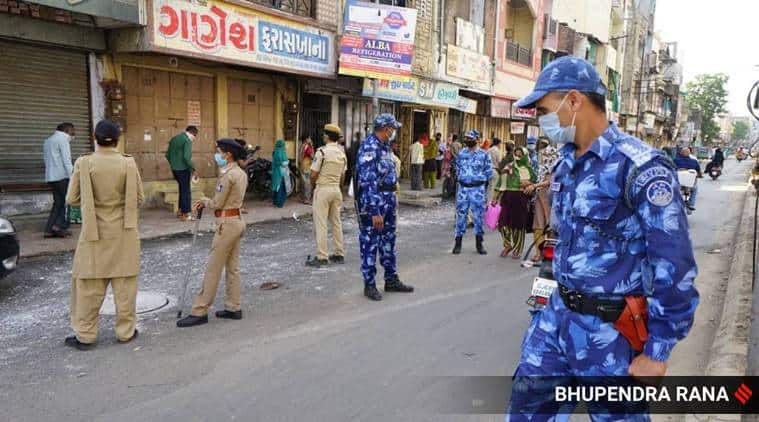 In a late night development on Wednesday, the district administration declared the neighborhood of Tandalja in Vadodara as a red zone, enforcing immediate containment of 1,831 homes and 7,000 residents.

In an urgent meeting held at the Urban Health Center in the vicinity, Officer on Special Duty Vinod Rao, Commissioner of Police Anupam Singh Gahlaut, VMC health officials and local police in charge planned the possible ways to seal the area after it came to light that one of the eight positive COVID-19 patients from the Nagarwada neighborhood worked in a local hospital in Tandalja and may have interacted with locals.

Three days after 600 homes accommodating 3200 persons in Nagarwada were declared red zone and cordoned off, Tandalja became Vadodara’s second red zone. Rao told this newspaper that a patient from Nagarwada had a contact in a hospital in Tandalja and interacted with locals, forcing the authorities to enforce containment of the area. “The hospital has been sealed after we learnt that the positive patient had been attached here. He also interacted with locals and it is now necessary to cordon off this area,” Rao said.

The patient is a 22 year old doctor, whose 15 year old younger brother tested positive a day before him on Monday. Both are residents of Nagarwada and have no recent travel history. A total of 37 residential colonies have been included in the containment area, located around the hospital which was running its OPD until Monday.

The local hospital, identified as Muawin hospital has been sealed and staff members quarantined as well. According to officials, the hospital is run by a Charitable trust of the same name that also provides “emergency relief” help. Sajid Patel, President of the Muawin Charitable trust told this newspaper, “The Authorities had quarantined my hospital on Monday after the 15 year old boy from Nagarwada tested positive and it turned out that his brother was a doctor with us. Later, on Tuesday, he also tested positive and it is become necessary to close down. The authorities have asked me to seal the hospital for 28 days.”

A VMC official told this newspaper that the possibility of a patient having been the source of infection to the doctor cannot be ruled out. At the same time, the administration is also concerned about the doctor having seen other patients while having possibly already contracted the virus. “It is necessary to seal the area as it is a complex web of interactions between the persons who have tested positive and those who could be affected,” the official said, adding that the civic body will begin the work of door to door health check ups as well as sampling suspected cases from the area on war footing from Thursday.