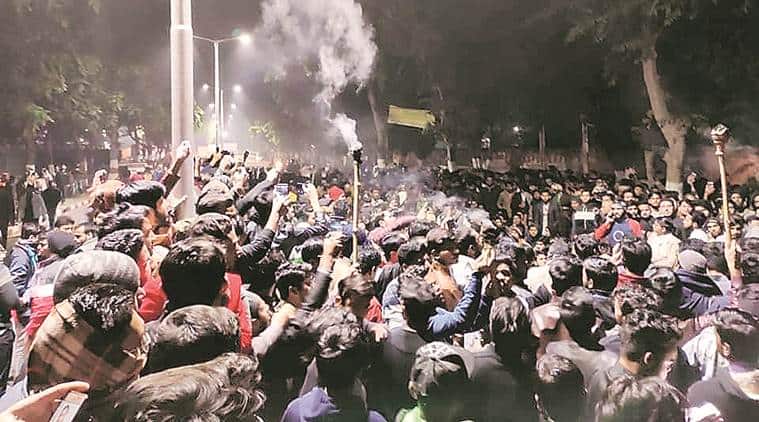 Students protest at the AMU campus on Tuesday night. (Express)

A TOTAL of 20 Aligarh Muslim University (AMU) students were booked by the police in the past 48 hours for allegedly violating CrPC section 144 that was imposed across Lucknow in the wake of Citizenship (Amendment) Bill being tabled in Parliament. They were also booked on charges of clashing with the police Tuesday, when several students took out a ‘torch procession’ in protest against CAB.

Former president of AMUSU, Salman Imtiaz, said, “All 25,000 students of the varsity did not eat in protest. The hunger strike started this morning will end tomorrow (Thursday) morning. This Bill against the Constitution and as students of this country, we are opposing it and will continue our protest,” claimed Imtiaz.

They also claimed to have boycotted academic activities, but the university administration denied this and said examinations and classes were held as scheduled. The administration also maintained that there was calm on the campus.

“Apart from the 20 students, more than 500 unidentified persons have also been booked for gathering without permission as a large demonstration had taken place Tuesday. Rapid Action Force (RAF), Provincial Armed Constabulary (PAC) and personnel from four police stations have been deployed at the University for preventive measures. Protests in small pockets are currently taking place and the situation is under control,” said Anil Kumar, Circle Officer (City 3rd).

According to the police, outgoing Imtiaz is among the named accused.

Shafe Kidwai, member and in-charge of Public Relations of AMU, said, “A protest was held against CAB and NRC on the university premises and students gave speeches. Academic activities like examinations were held as per schedule.”