Chandrayaan 2 Lifts Off In Historic Moment For ISRO 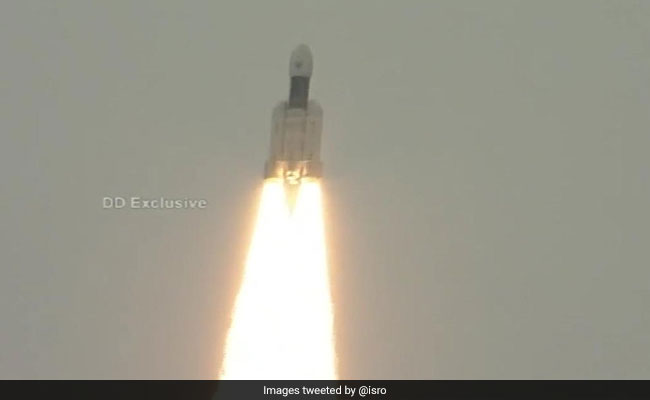 The giant heavy-lift rocket carrying India's moon mission Chandrayaan 2 lifted off from its launch pad at Andhra Pradesh's Sriharikota at 2:43 pm today. India's space scientists had a narrow one-minute window for their second attempt at launching the moon mission today, a week after the mission was aborted 56 minutes before lift-off.

In visuals, scientists at the Indian Space Research Organisation's control room closely watched the rocket as it gained speed and headed towards the outer atmosphere, propelled by the massive thrust from the powerful 640-tonne 'Baahubali' rocket.

The GSLV Mark 3 - ISRO's largest and most powerful rocket - is 44 metres long or as tall as a 15-storey building.

The rocket propelled into space an orbiter, a lander 'Vikram' (named after ISRO founder and eminent Indian scientist Vikram Sarabhai) and a moon rover 'Pragyaan'.

The success of Chandrayaan 2 mission will make India the fourth country after the US, Russia and China to pull off a soft landing on the moon.

The mission was stopped 56 minutes and 24 seconds before its launch last Monday after a technical snag was discovered in the unmanned launch vehicle system. ISRO said the decision was taken "as a measure of abundant precaution".

A senior ISRO official had earlier told NDTV that had the problem not been rectified, Chandrayaan 2 would have been a "total failure". "The problem was serious, but simple to resolve. Luckily, we caught the problem. Alertness, prayers and the good wishes of one billion Indians helped avert the mission's total failure," the official said.

A soft landing on the moon, or as ISRO chairman K Sivan terms it, the "fifteen minutes of terror", will then be attempted, after which the rover will carry out research, including a thorough mapping of the moon's resources, looking for the presence of water on the moon and clicking high resolution images as well.

K Sivan has called Chandrayaan 2 the "most complex mission ever undertaken by ISRO".

Considering ISRO's budget is less than 20 times that of USA's NASA, a success story for the Rs 1,000-crore moon mission, which cost less than Hollywood blockbuster 'Avengers: Endgame', would be a giant boost for India's space plans.