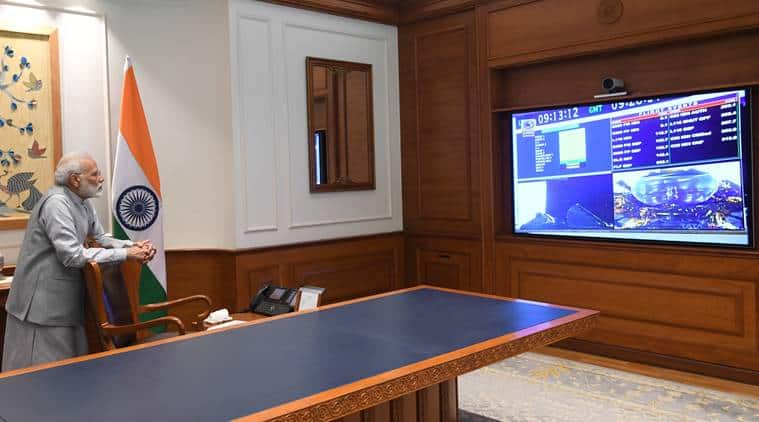 Moments after India launched its second moon mission, Chandrayaan 2, Prime Minister Narendra Modi Monday described the occasion as a “special moment that will be etched in the annals of history.” Taking to Twitter, the prime minister said, “The launch of #Chandrayaan2 illustrates the prowess of our scientists and the determination of 130 crore Indians to scale new frontiers of science. Every Indian is immensely proud today!”

India launched its first exploratory mission to the moon from Andhra Pradesh’s Sriharikota.  The three-stage rocket GSLV-MkIII-M1 launch vehicle lifted off at its appointed time of 2.43 pm and successfully injected Chandrayaan-2 into Earth’s orbit, where it will spend 23 days before heading to the moon’s south pole. Follow Chandrayaan-2 launch Live Updates Here

Special moments that will be etched in the annals of our glorious history!

The launch of #Chandrayaan2 illustrates the prowess of our scientists and the determination of 130 crore Indians to scale new frontiers of science.

Chandrayaan-2 is expected to spend 13 days in lunar orbit, before the Vikram Lander module and the Pragyaan Rover will separate from the Orbiter and make its way to the surface of the Moon. Adding that the launch will give a boost to India’s lunar programme, Modi said, “Efforts such as #Chandrayaan2 will further encourage our bright youngsters towards science, top-quality research and innovation. Thanks to Chandrayaan, India’s Lunar Programme will get a substantial boost. Our existing knowledge of the Moon will be significantly enhanced.”

Along with the Prime Minister, President Ram Nath Kovind said that the launch of the mission is a proud moment for India and congratulated the ISRO. “Launch of #Chandrayaan2 from Sriharikota is a proud moment for all Indians. Congratulations to our scientists and engineers for furthering India’s indigenous space programme. May ISRO continue to master new technologies, and continue to conquer new frontiers,” the President tweeted.