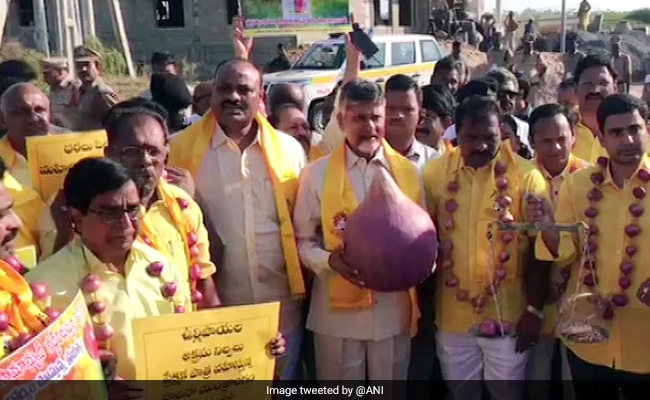 Mr Naidu and his party colleagues wore onion garlands around their necks and protested at the fire station near the state secretariat in Venkatapalem village in Amravati.

The TDP leaders also carried a big onion model while a weighing scale, with gold on one side and onions on the other, was also seen at the protest to suggest that the vegetable has become a precious commodity with sky-rocketing prices.

"Onion prices have risen to the level of gold prices and the state government has failed to reduce the price. Our fight will continue until the prices of onion come down," Mr Naidu said.

Raising slogans against the Chief Minister YS Jaganmohan Reddy-led government, Mr Naidu marched towards the state assembly where they were stopped by the police when they tried to enter inside the premises.

This action by the police led to a verbal fight between them and the TDP leaders.

On Sunday, people queued in West Godavari district to buy onions at subsidised rates at a Rythu bazaar (farmers market).

The price of onions has been on the rise in many states over the past week, which has sparked protests.

Is it time to switch your pillow? Look out for these signs

What is the difference between scars and hyper pigmentation?