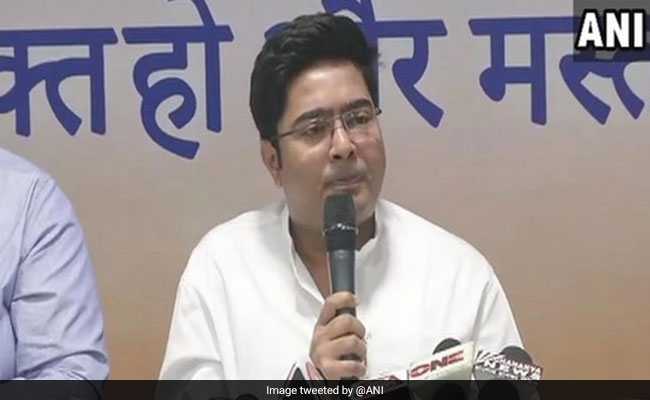 Senior TMC leader Abhishek Banerjee on Monday hit back at Union Home Minister Amit Shah over his remark that "bomb-making factories are present across West Bengal" and said the BJP government at the Centre has data on such units but is clueless on statistics on migrant labourers.

Terming Mr Shah's remark as "disgusting poll propaganda", the TMC MP, who is also the nephew of Chief Minister Mamata Banerjee, accused the Union home minister of trying to disturb the social harmony in the state.

"Ironic that Mr @AmitShah has found data on bomb factories, but when it comes to data on migrants, his @BJP4India govt is clueless! How dare you threaten the people of Bengal with President's Rule to disturb our social harmony. Disgusting poll propaganda! #BengalRejectsTanaShah," he tweeted.

Mr Shah, in a recent interview to a news channel, had said that law and order has "gone for a toss" in West Bengal.

"Corruption is at its peak. The law and order situation has gone for a toss. There are bomb-making factories in every district. The situation is not good."

"And what is more worrisome about democracy is the way opposition workers are being framed in false cases and killed. Such things don't happen in other states. Once upon a time, such things used to happen in Kerala, but now there have been improvements," Mr Shah had said.

When asked about his views on BJP leaders' demands for implementation of the President's rule in West Bengal, Mr Shah had said, "A leader of a political party is well within his right to make such a statement. As far as the Government of India is concerned, we have to work as per the constitutional norms, the ground situation and the governor's report."

The comments on political killings drew sharp reactions from the TMC, which asked him to direct his attention to Gujarat and Uttar Pradesh, where the rule of law has "ceased to exist".

The Best Time Table for every student | 5 Big Mistakes | SuperTips

Pics: A Look At Gul Panag's Swimsuit Collection. Not All Are 20-Years-Old