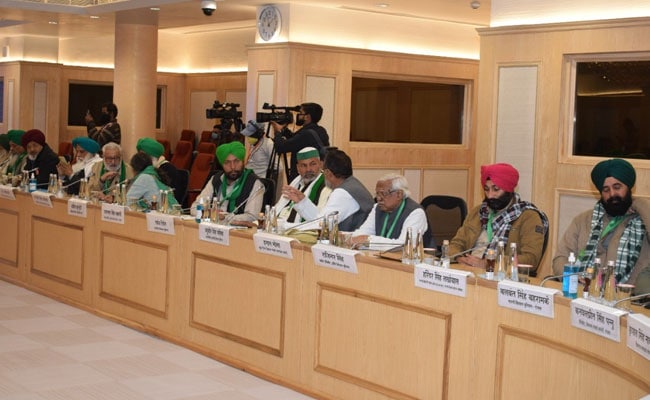 Farmer protest: Farmers have been protesting against the new farm laws near Delhi border points.

The seventh round of talks between the Centre and the protesting farmers is being held with two key issues still on board -- the repeal of the three agriculture laws and giving legal status to the minimum support price guarantee in the next round of talks. The farmers, camping out at the Delhi borders amid the bitter cold and rains, have warned that they will hold a tractor rally on Republic Day if their demands are not met.

The meeting began with a two-minute silence for those who have died in the agitation, the Union Agriculture Ministry said.

In the last round of meetings, the Centre said the two sides had come to an understanding on two of the four demands of the farmers - withdrawal of the Electricity Amendment Bill and the penal provisions for stubble burning in the Air Quality Commission Ordinance.

But the deadlock has persisted over the repeal of the three farm laws passed in September that had the farmers up in arms.

The farmers' representatives who attended the last round of meeting on December 30, said the government has indicated that it would not repeal the laws, citing the long and cumbersome process required.

The government also made it clear that it is not ready for legally enforced support prices for produce and said a committee can be formed to look into it.

The farmers have taken a hard line on the issue, saying they will hold a tractor rally on the GT-Karnal road on January 6 if their demands are not met. "If the government doesn't agree to our demands, we will start marching towards Delhi from Shahjahanpur border next week," Swaraj India chief Yogendra Yadav had said.

There are also plans to hold a rally on January 26, the Republic Day.

Last month, the Supreme Court had ordered that a special committee be formed, insisting that the Centre's negotiations have failed. "Your negotiation will again fail as they (the farmers) won't agree," said the bench led by Chief Justice of India SA Bobde.