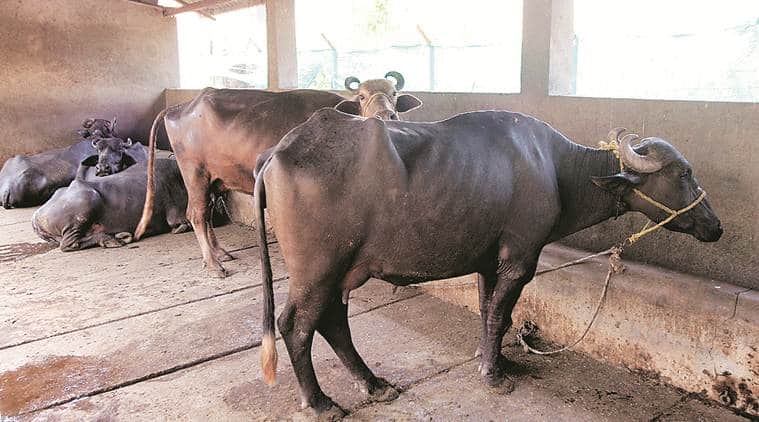 Haryana Police on Tuesday confirmed the deaths of at least 38 buffaloes at the National Dairy Research Institute (NDRI), Karnal, in less than a week.
A police team visited the institute, a day after an Indian Veterinary Research Institute (IVRI) team did the same and launched an investigation.

Animal rights activist Naresh Kadyan had filed a police complaint against NDRI Director Dr R B Singh, alleging that at least 75 buffaloes and cows had died on the premises over the past week because they were given toxic feed. He also alleged that the dead animals were buried without post-mortem and the matter was “hushed up”. Police had lodged a DDR (Daily Diary Report) on the basis of this complaint.

Sanjeev Gaur, SHO of Karnal Civil Lines police station, who visited the spot, said NDRI officials told them 38 buffaloes had died since September 11. “The NDRI officials suspect some infection was the cause of death.”

Karnal Superintendent of Police Surinder Singh Bhoria told The Indian Express Tuesday that they sent their team to the NDRI after receiving the complaint. “We have been told that these buffaloes died in a shed because of some disease. A committee has been formed to ascertain the exact cause of death. The post-mortem report of the buffaloes is also awaited. We will initiate further action on the basis of the committee’s report,” he added.

Haryana Animal Husbandry and Dairying Department Deputy Director Rajbir Vats said, “NDRI is a central institute but we are keeping an eye on the developments as the matter relates to animals.”

The NDRI at Karnal is one of the country’s premier research institutes on dairy development in the country.