By 2047 sangh would become indistinguishable from indian society 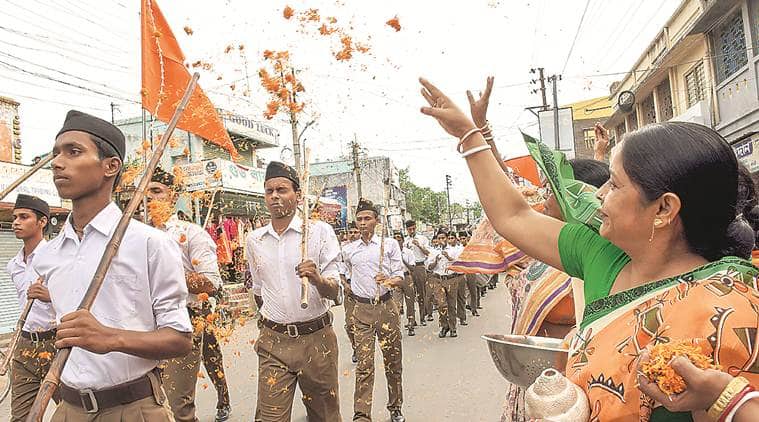 “What will be the state of our nation in 2047 (centenary of Independence)? After deliberating with RSS functionaries, the common answer I could gather was that India… Sangh would become indistinguishable from Indian society. Sangh would become coterminous with all of Indian society and the need for it to exist as a distinct entity would be obviated.” This is what RSS pracharak Sunil Ambekar writes in his forthcoming book “The RSS Roadmap for the 21st Century”.

The book, to be released on October 1 by RSS sarsanghchalak Mohan Bhagwat in Delhi, throws light on several issues pertaining to the RSS.

In the book, Ambekar — the Sangathan Mantri (organising secretary) of the ABVP, an RSS affiliate working among students — advocates the Ram temple in Ayodhya, uniform civil code and constitutional amendment. “Constitutions are not frozen in time; they are dynamic texts. Uniform Civil Code is not only necessity for Ekatmata, but also a preventive against the exploitation that Muslim women have had to endure due to their religious laws,” it says. While the book was being released for printing, the government decided to scrap special status of Jammu and Kashmir and bifurcate the state.

In the chapter “The History of Bharat”, Ambekar narrates the RSS’s efforts to revise history and calls renaming of cities like Faizabad to Ayodhya and Allahabad to Prayagraj as “an important part of the reclamation (of History) project”. He also demands that Aurangabad in Maharashtra “be renamed as Sambhajinagar”.

Ambekar writes that RSS backs use of terms “Hindutva” and “Hindu Rashtra” and “is working to give it greater currency”. He clarifies that “Hindu Rashtra is not anti-Muslim” and that Hindu Rashtra “is the imagination of contemporary, non-violent nation where peace and prosperity prevail, which promotes freedom of worship and equality for women”. The cause of Hindutva is the cause of Ekatmata, “Muslims and Christians can also subscribe to Hindutva because it is a matter of national identity”. Here he quotes from RSS’s second sarsanghchalak M S Golwalkar’s book Bunch of Thoughts that “It is the forefathers of the Hindu people that have set up the traditions of love and devotion for the motherland”.

He says the RSS has worked among deprived sections and hopes in the chapter “Caste and Social Justice” that “As Sangh work expands, SCs and OBCs will be seen in prominent positions in all tiers of Sangh activity”.

The book, which advocates promotion of Sanskrit and Indian languages, says that 2025 will be the Sangh centenary and “Forward planning, meticulous designing of initiatives and inspiring rich contributions from activists is a Sangh specialty, and twenty-first-century India will see a lot of it.” It asserts that “Sangh is not a political party but a social organization”.

The book shows concern about religious conversions. It says, “In the beginning, the Congress was alive to such issues but gradually developed a clear disconnect and disregard.”