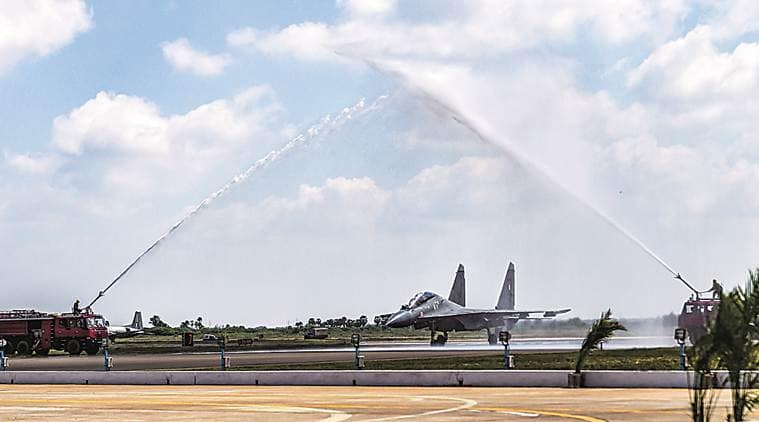 The Sukhoi-30 fighter aircraft squadron being accorded a water salute during its induction ceremony at the Thanjavur airbase on Monday. (PTI)

Adding teeth to India’s air and maritime dominance in the Indian Ocean Region, a squadron of fourth-generation fighter jets Sukhoi-30 MKI equipped with the BrahMos missile was inducted on Monday at the airforce station in Thanjavur in the Southern Air Command.

The squadron is a resurrection of the Tigersharks 222 squadron, which was raised at Ambala in 1969 with Sukhoi Su-7 aircraft. In July 1971, the squadron was moved to Halwara and was engaged in combat with Pakistan Air Force in the 1971 war.

Speaking at the ceremony, Rawat said the resurrection of the 222 Squadron “highlights the integration and jointness that is the future for our armed forces” and “integration of this weapon system would not have been possible but for the support of the Indian Air Force, the HAL, the DRDO and BrahMos”.

He said the Sukhoi-30 MKI “equipped with BrahMos will indeed become a game-changer for our armed forces”.

“Not only will it extensively enhance the security of our maritime domain, but the squadron can also perform tasks in support of the land forces, protecting the vulnerable areas and points and any other tasks that may be assigned to them,” he added.

Air Force Chief Bhadauria congratulated the DRDO, HAL and the Southern Air Command. With a combat radius of nearly 1500-km without requiring a refuel, Sukhoi 30 jets have been modified to carry BrahMos air-to-surface missiles with a range of nearly 300 km, giving them the capacity to conduct long-range precision strikes.

The 6 Ministers Who Are Taking Oath Along With Arvind Kejriwal

No sculpture of Konark Sun Temple has been replaced, says ASI

Australia should ease travel ban on foreigners from China – ambassador