A senior BJP leader, BL Santhosh, today deleted his tweet responding sharply to US democrat frontrunner Bernie Sanders's criticism of President Donald Trump in connection with his recent visit and reply to a question on violence in Delhi.

Mr Santhosh, a general secretary of the ruling party, had suggested in his riposte that India would be "compelled" to play a role in the US presidential elections.

Bernie Sanders, a Democratic presidential nominee, had accused Donald Trump of failing on human rights with his response to the Delhi violence.

"Over 200 million Muslims call India home. Widespread anti-Muslim mob violence has killed at least 27 and injured many more. Trump responds by saying "That's up to India". This is a failure of leadership on human rights," Mr Sanders tweeted on Wednesday.

Mr Santhosh tweeted in reply: "However much ever neutral we wish to be you compel us to play a role in presidential elections. Sorry to say so...But you are compelling us." 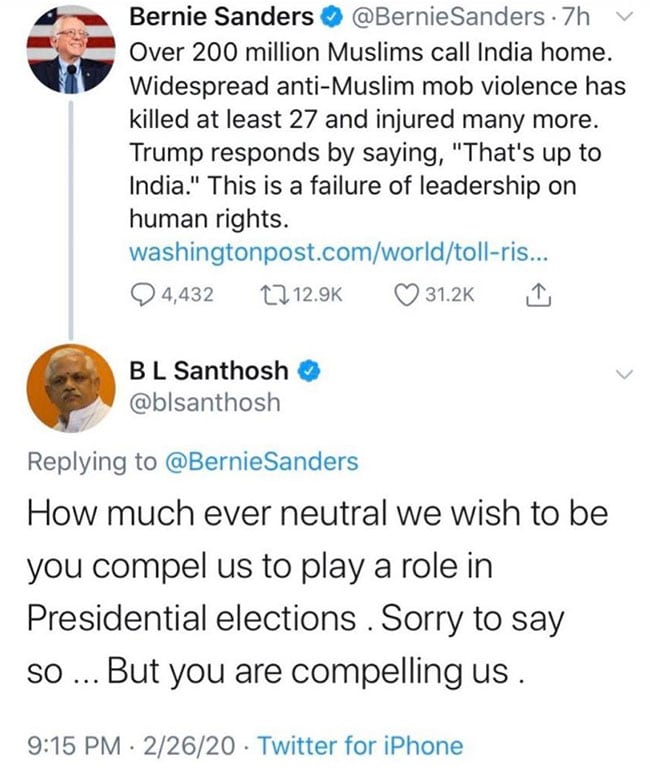 Mr Trump had, on Tuesday, replied to a question on the clashes during his visit, saying, "As far as the individual attacks, I heard about it, but I didn't discuss that with him (PM Modi). That's up to India."

Another Democrat candidate, Senator Elizabeth Warren, had also criticized the violence over the Citizenship Amendment Act protests in Delhi.

The violence in northeast Delhi, which has left 32 dead and over 200 injured, cast a shadow on Mr Trump's two-day visit, which was viewed as his outreach to the Indian American community, a sizeable group of voters, as he faces a re-election bid in the US presidential polls later this year.

During his visit, President Trump lavished praise on India and Prime Minister Narendra Modi, calling him a "great friend" and a "very popular leader".