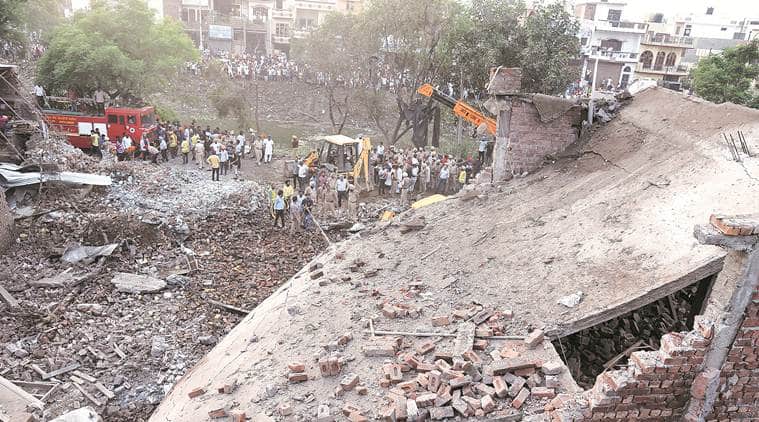 The Batala police Saturday named the nephew of the owner of a firecracker factory as an accused in case registered after a blast at the illegal unit here earlier this week killed 23 persons.

Incidentally, the accused, identified only as Roomy, was believed to have died in the blast. His name was added in the FIR after the police got to know that he had survived the blast but had sustained injuries for which he got treated at a private hospital in Batala before moving to Amritsar.

He was absconding till the time of filling this report.

Initially, police had registered an FIR against the unnamed family members of Jaspal Singh Mattu, the factory owner who had died around year back. Mattu was also an was accused in another case of blast the same factory in 2017, in which one person had died and two sustained injuries.

Roomy is the only member of Mattu’s family who was allegedly working at the factory at the time of blast and survived.

“He was working in the factory when the blast took place. He got injured and got admitted at some private hospital. We have named him the FIR and a search is on to arrest him. So far he is the only named accused in the case. According to my knowledge, all other family members of Jaspal Singh, working in the factory at the time of blast, died,” Batala SSP O S Ghumman said.

Mattu’s wife and daughter too had sustained injuries in the blast. However, police said that they were not at the house constructed on the factory premises and were not involved in running factory.

Mattu’s son Rahul confirmed that Roomy was alive and had sustained injuries in the blast.

“We too had presumed that Roomy had died with all the others. At least members of the family, working in the factory at the time of blast, died. Now that we know that Roomy is alive, we are searching for him. We went to Amritsar too, but didn’t find him there”.

Rahul runs a saloon and he was not at home when the blast took place. He claims that he was also not involved in factory functioning.

He claimed that they were not being allowed to remove their belongings from the house that was demolished by the NDRF team as it had become dangerous for the other buildings around.

“We went to the house to take out our belongings but they asked us to leave the place and demolished it,” said Rahul.

He claimed that the family had a licence to run the firecracker factory. “We had the licence to sell the firecrackers and we had applied to renew it at Gurdaspur deputy commissioner’s office. Now, all our supporting documents and other belongings are under the debris of our demolished house,” he added

Meanwhile, the family of a victim, whose house was right behind the factory and had got damaged due to blast impact, suffered more loss as thieves allegedly struck at their house.

“Our two family members were killed and the house was badly damaged. There was no electricity that night. We were outside the house when some thieves entered and took away gold worth Rs 10 lakh,” claimed Amandeep Singh, the house owner.