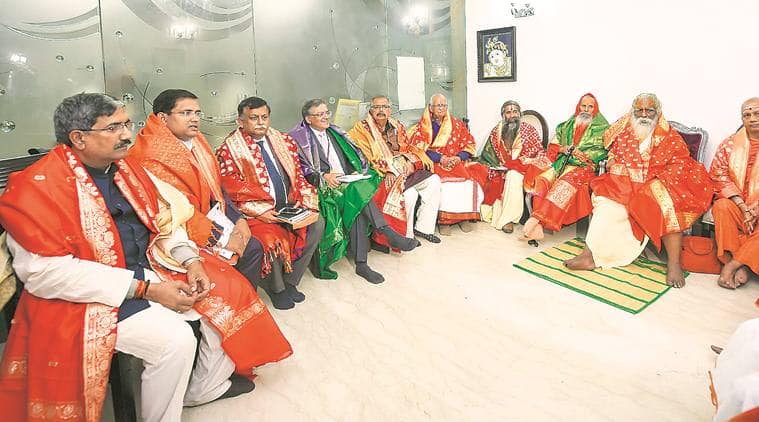 Members of the Ram temple trust meet for the first time in New Delhi, Wednesday. PTI

Nripendra Misra, former Principal Secretary to the Prime Minister, will head the committee for construction of the temple and management of the 66.7 acres in Ayodhya.

Das and Rai are among those named by the CBI as accused in the criminal conspiracy case relating to the demolition of the Babri Masjid in 1992. They are out on bail and the case is being heard before a special court in Lucknow.

The 15-member trust, operating from its office at the Greater Kailash-I house of senior lawyer and founder trustee K Parasaran, appointed Govinddev Giri of Pune as treasurer and decided to open a bank account with the State Bank of India in Ayodhya.

At the meeting, it was decided to build the temple in accordance with a model prepared by the VHP. Sources said the construction of the temple may start by April.

There were acrimonious exchanges when Mahant Dharam Das arrived uninvited and threatened legal action if he was not included in the trust.

Ever since the Supreme Court ruling in favour of the Hindu parties to the Ayodhya dispute, there was speculation that Das and Rai would be given roles in temple construction. When the government announced the trust, the two were not included. Sources said the government did not want to start a controversy by nominating persons facing serious charges in an ongoing case. The decision, sources said, was taken by the trust.

Incidentally, the Nyas headed by Das has already merged with the Ram Janmabhoomi Teerth Kshetra Trust and transferred all its assets (including pillars carved for the temple and funds collected during the Ayodhya movement) to the new trust. Sources said formalities of this merger were completed on the day the new trust was registered.

After the meeting Wednesday, Champat Rai said: “The inspiration that led Sardar Vallabhbhai Patel to get the Somnath temple constructed inspired people to free the Ramjanmabhoomi… We thank the Centre and the UP government for working towards this with alertness, and for the success they had in getting influential people of society to understand their point of view in a manner that the entire country accepted the SC judgment with pleasure.”