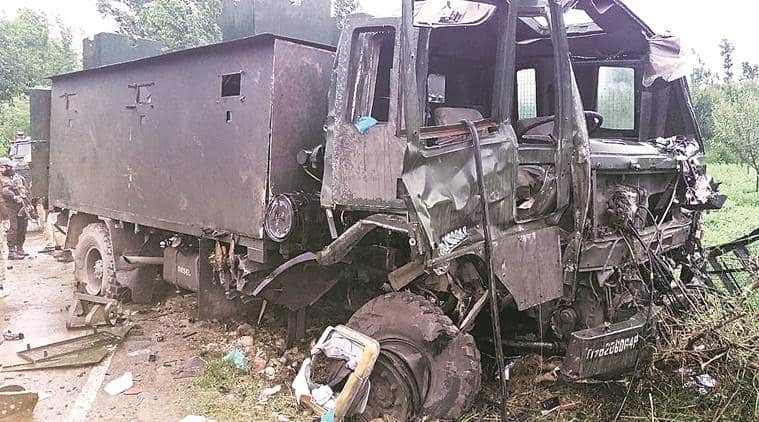 In two separate incidents in South Kashmir Monday, an Army Major was killed in a gunbattle in Anantnag district and at least six soldiers, and two civilians, were injured in a car bomb explosion that targeted a military vehicle in nearby Pulwama, officials said.

The officer killed in the gunbattle was identified as Major Ketan Sharma (31) of 19 Rashtriya Rifles — his family is in Meerut. A militant, who is suspected to be a foreign national, was also killed in the exchange of fire during a joint security operation in Badoora village of Achabal early morning. Two other Army officers were injured, J&K Police said.

In the evening, militants detonated explosives placed inside a car parked on the roadside at Arihal village of Pulwama when a modified Army vehicle was passing by.

On June 16, The Indian Express had reported that Pakistan had shared intelligence inputs with India and the US regarding a possible attack by militants in Pulwama district using an improvised explosive device mounted on a vehicle. The Army described Monday’s attack as a “failed attempt” and said that a few soldiers were injured. “A failed attempt was made to attack a mobile vehicle patrol of 44 RR with a vehicle-based IED while the Army patrol was moving,” Defence spokesman Col Rajesh Kalia said. “(There are) a few minor injuries. The damage was minimised due to the alertness of the patrol party.”

Sources said the car was placed at a location where vehicles usually slow down ahead of a diversion near a bridge that is not functional. They said the blast extensively damaged the front of the fortified Army vehicle. They said that three soldiers in the vehicle’s front cabin, including the driver, were grievously injured. Following the blast, a joint team of police, Army and paramilitary forces cordoned off Arihal and adjacent villages in a massive search operation.

Challenges on the ground

The ATTACKS Monday are a reminder of the challenges on the ground for security forces and the administration in the Valley as J&K braces for the start of the Amarnath Yatra next month. The poll panel too is looking at a window for the conduct of Assembly elections in the state before the onset of winter.

“The driver of the vehicle is injured and under specialist care. Other soldiers, brought to the hospital with minor bruises and concussion/ contusion for investigations, are stable. The damage was minimised due to the swift action of the driver,” the Defence spokesman said.

The gunbattle in Anantnag, officials said, began after a militant fired on a joint security team. “In the exchange of fire at the site of encounter, one Army officer Ketan Sharma sustained gunshot injuries. He was evacuated to the hospital where he attained martyrdom. Besides, two other Army officers also sustained injuries and are undergoing treatment at hospital,” J&K Police said in a statement.

Police said that arms and ammunition were recovered from the site of the encounter, and that the “identity and affiliation” of the militant was being ascertained.