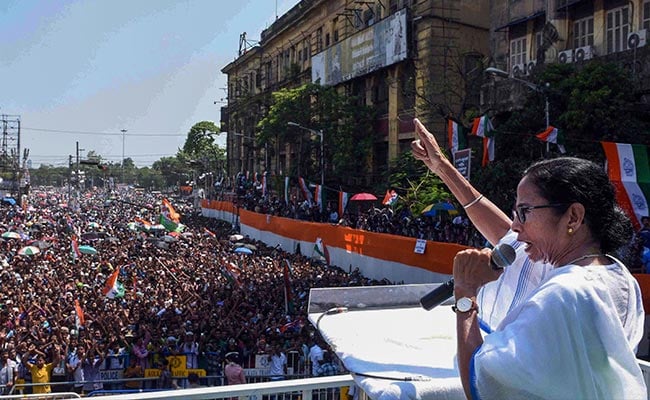 Mamata Banerjee today launched her fightback for Bengal with a mega rally in Kolkata -- her first since Trinamool's 12-seat setback for in the Lok Sabha elections and BJP's 16-seat inroad.

She took the bull by the horns, calling on the BJP to return black money to offset its 'cut money campaign' against her party.

But what she said has been overtaken by how many people listened to her. In short, what was the turnout, the usual or less? No prizes for guessing: BJP called it a flop show.

But for a party that lost 12 seats in Parliament two months ago, the turnout must have been a relief. It did not look disappointing, at least from the mega rally stage.

Her other big slogan, throw away the EVM and return to the ballot.

"This election was a mystery... not history," she said about BJP's substantial victory.

If the Chief Minister's speech was punchy, the mood at the BJP office was upbeat too. BJP chief Dilip Ghosh called the rally a flop show.

"When there is a big rally here, the mood becomes different. There was nothing this time. It was a flop show. Lot of thunder but no rain," he said, adding, "The TMC leaders waited at rail stations to greet people from the districts. Nobody came. They made so much egg curry that the few people who showed up, were given four eggs each."

But Mamata Magic is still real for many.

"If the BJP thinks they will form government in Bengal in 2021, they are day dreaming. Didi will be CM for the third time," said Bhabesh Das, a young supporter, who came from Bantala for the rally."

Expectations, however, have clearly been recalibrated. At last year's 21 July rally, her supporters wanted Didi for PM.

This time: a third term for the Chief Minister.