THE PUNE District administration is working towards reducing the number of poll booths located on higher floors to make the voting process easier for the elderly and the differently-abled, District Collector Naval Kishore Ram said on Saturday.

Ram was briefing the media about election preparations in the district, shortly after the Election Commission announced that polling for the 288 assembly constituencies in the state will take place on October 21. The votes will be counted on October 24. 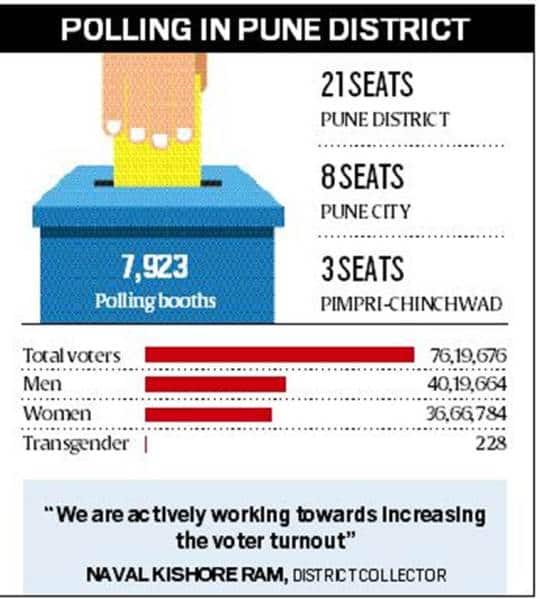 “In the three months since Lok Sabha elections, we have managed to enroll 59,000 young voters, of about 18-19 years of age, in voters’ rolls,” said Ram. He said that the district administration plans to undertake drives to create awareness about the importance of voting.

“During Lok Sabha polls, the polling percentage in Pune district was 57 per cent and in Pune city, it was only 49 per cent. Although it’s a trend that in Lok Sabha polls voter turnout slumps a bit as compared to other elections, we are actively working towards increasing the voter turnout,” said Ram.

The administration is also focusing on areas that saw a low voter turnout, including centres where the turnout was lower than 30 per cent. “There are 98 such centres in Pune district, of which 89 are located in urban areas and nine are in rural areas. We will reach out to people in these centres,” said Ram. He added that in 49 voting centres, all of them in rural areas, more than 80 per cent voter turnout had been recorded in the Lok Sabha polls.

The district administration was committed to make the voting process convenient for everyone, said Ram. As part of these efforts, the administration has decided to set up most of the polling booths on the ground floor.

“Last time, a total of 1,011 booths were located on higher floors. This year, we are planning to set up most of our 7,923 booths on the ground floor by shifting those which were set up on upper floors during the Lok Sabha polls…,” said Ram.

Pune district has 21 seats, of which Pune city has eight seats and Pimpri-Chinchwad has three seats.