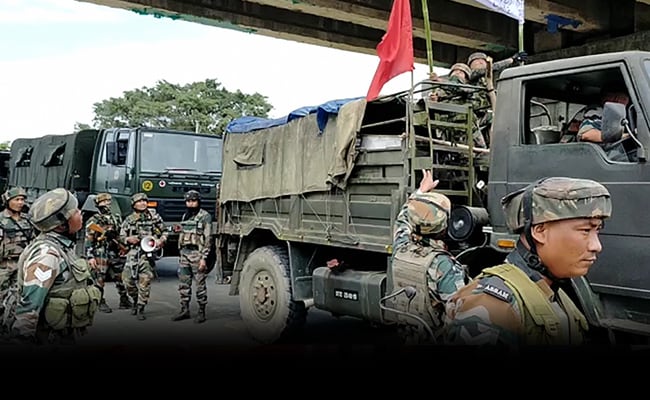 The army has been reportedly deployed in four areas of Assam as thousands of protesters opposing the Citizenship (Amendment) Bill or CAB took to the streets last evening, clashing with policemen and plunging the state into chaos. Amid violent protests in the northeast, the contentious bill passed parliament last evening after being cleared by the Rajya Sabha with 125 voting for it and 99 against.

Guwahati, Assam's largest city and the epicentre of the protests, was placed under indefinite curfew while mobile internet services were suspended in 10 districts in the state. The curfew was later extended to Dibrugarh as protesters targeted the homes of Assam Chief Minister Sarbananda Sonowal and Union minister Rameswar Teli in the district. Stones were thrown at the house of the chief minister in the Lakhinagar area. Protesters also damaged properties at the house of the Union minister in Duliajan.

This morning, people defied the curfew in Guwahati and came out to protest.

Tens of thousands of people against the contentious Citizenship (Amendment) Bill descended on the streets of Assam, setting of protests of a magnitude unseen since the violent six-year movement by students that ended with the signing of the Assam accord.

Many trains that start from Assam have been cancelled or rescheduled due to the intense protests. A railway station in Dibrugarh's Chabua, the hometown of the Chief Minister, was set on fire by protestors late in the night. The Panitola railway station in Tinsukia district was also torched, a Northeast Frontier Railway spokesperson said.

In neighboring Tripura, troops of the Assam Rifles, a paramilitary force commanded by Army officials, were pressed into service yesterday, the army said.  A defence spokesman had earlier said in a statement that two columns of the army were deployed in Tripura.

Internet services are already suspended in the entire state for 48 hours from 2 pm on Tuesday. The opposition Congress has, meanwhile, called for a shutdown in Tripura today.

Though no party or student body had called a shutdown in Assam, protesters, a majority of them students, fought pitched battles with security forces, including in front of the secretariat, the seat of the BJP government.

The Citizenship (Amendment) Bill was cleared by the Lok Sabha two days earlier with the support of 334 MPs in the house where the government enjoys a brute majority. The ruling BJP does not have a majority in the Rajya Sabha but managed the numbers needed to pass the bill.

A921 closed due to landslide