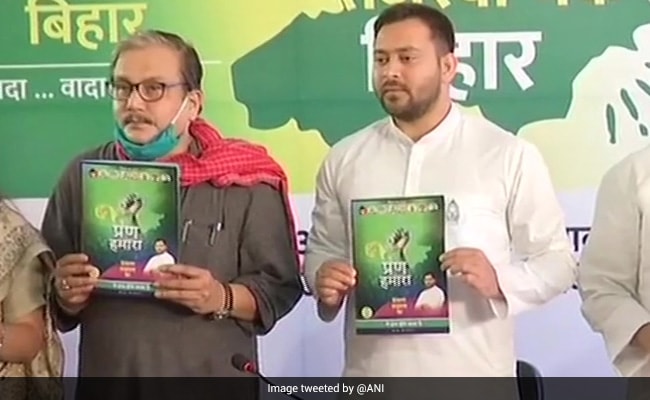 He also hit out at the Bharatiya Janata Party for trying to "fool people".

"Our promise for 10 lakh jobs is genuine. We could have also made fake promises of 50 lakh jobs like the NDA government," said Mr Yadav further inflating the BJP's poll promise of 19 lakh jobs in Bihar.

The promise was made in BJP's poll manifesto a day after Deputy Chief Minister Sushil Kumar Modi questioned how the Chief Ministerial candidate of the Grand Alliance plans to fund it.

"The Bihar government can easily provide 4 lakh jobs... The state has a budget of Rs 2.13 lakh crore of which only 60 per cent has been spent. Nitish Kumar has not been able to spend the remaining 40 per cent, which is Rs 80,000 crore," the leader of Opposition said.

"We want to make Bihar better. For this we have to compete with the national employment average... This is our promise for change. It is a vow. We will make it a reality. I repeat, Nitish Kumar is not being able to manage Bihar. He is tired," said Mr Yadav, who has been targeting BJP-backed Chief Minister Nitish Kumar over issues of unemployment, pandemic mismanagement and indifference towards migrants.

Mr Yadav's promise of 10 lakh government jobs - which has won him the most cheers at his hundreds-strong rallies - has also provoked a series of responses from the three-time Chief Minister, and ridicule from the BJP.

Bihar votes for a new government across three phases starting October 28, with results due November 10.