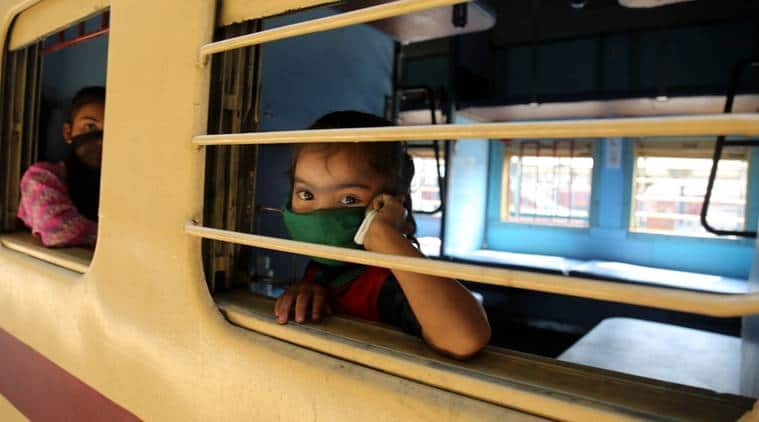 Across India, Railways has distributed at least 1.19 crore meals and over 1.5 crore bottles of water. (Express photo: Gurmeet Singh)

As migrant workers make their way home on Shramik Special trains, several corporate giants have stepped in to provide them with refreshments and other requirements.

With supply chains stressed due to the lockdown, sourcing packed food to distribute in trains has become a challenge in places like Bihar. Thus, officials have established direct connect with corporate majors, and several business houses are helping, under their Corporate Social Responsibility initiative.

On Monday for instance, the Coca-Cola Company sponsored one lakh bottles of its aerated soft drinks and juices for passengers on Shramik Specials arriving in or passing through Bihar.

Soft drink bottles worth Rs 80 lakh donated by Coca Cola were distributed at the Danapur Division in Patna. Officials said surprised passengers preferred the soft drinks first over the hot meals being served.

Danapur, the first main stop after crossing Mughalsarai, serves trains to Northeast and North Bengal, as well as to several locations in Bihar. Bihar has so far received 1,482 trains, while at least 65 have gone to the Northeast. Almost all of them have had pit stops at Danapur. The snacks were provided over and above the freshly cooked meals, like biryani, served in all trains.

FMCG major ITC contributed packaged snacks, biscuits and such items worth Rs 25 lakh, along with water bottles to make “ration kits” for each migrant, especially on trains going to Northeast.

Crompton Greavs provided 25 industrial-level sprayers for sanitisation, utilised on all the big stations in the division.

Along with sourcing meals, distributing them to a huge number of passengers was also a challenge. To meet this, Divisonal Railway Manager Sunil Kumar, and his team led by Senior Divisional Commercial Manager Aadhar Raj, devised a system of signing up volunteers from the Railway fraternity.

“The trains going to North Bengal, Assam and other Northeast states are coming to us from places as far-off as Goa and Maharashtra. They still have a good 12-hour journey left when they cross us. So a meal service and ration kit to each passenger was important. For manpower, we signed up volunteers who helped distribute the food and water. To these trains, we had to ensure passengers had eatables to consume twice,” said a senior official of the Danapur division.

As many as 500 railway functionaries signed up to be volunteers. Many went to smaller stations like Kiul and Jhajha along with medium-sized stations like Arrah and Buxar.

Seeing that several passengers were social media savvy — as they kept tagging the division’s social media handle with requests — railway officials started publicising a WhatsApp number on which passengers of incoming trains could update their current locations live, to give officials a realistic idea about when to expect the train. This feature came in handy when trains were diverted due to congestion.

Across India, Railways has distributed at least 1.19 crore meals and over 1.5 crore bottles of water.