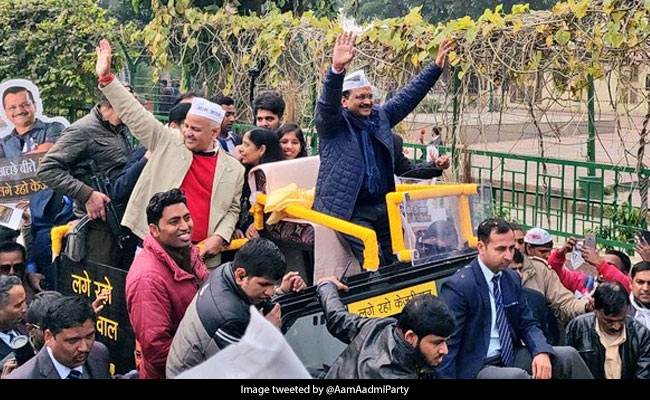 Delhi Chief Minister Arvind Kejriwal began a massive roadshow this afternoon, en route to filing his nomination for next month's Assembly polls, with a nod to a rally taken out by his AAP in 2013, ahead of the party's electoral debut. Shortly before the roadshow started the Chief Minister tweeted, recalling the rally the AAP held from the Valmiki Mandir. A rough translation of his tweet, which was written in Hindi, reads: "It was from here in 2013 that we took a broom for the first time to clear politics. Today, once again taking the blessings of Lord Valmiki, I will go to fill my nomination".

The roadshow began at around 1 pm from the Valmiki Mandir and will end at the Hanuman Mandir in Central Delhi, after which Mr Kejriwal will file his nomination papers from the New Delhi constituency that he won in both the 2013 and 2015 polls.

Visuals of Mr Kejriwal's roadshow show the Chief Minister standing in a slowly-moving vehicle and surrounded by a sea of supporters holding brooms (the party symbol).

The roadshow will go to the Hanuman Mandir in Delhi's Connaught Place via Panchkuian Marg, into the Inner Circle and then towards the Outer Circle to Baba Kharak Singh Marg, according to news agency IANS. It will end near the Patel Chowk Metro Station.

Yesterday Mr Kejriwal released what he called a "10-point guarantee card" to voters that promised free power, 24-hour drinking water on tap and a world-class education to every child. Along with it, he promised a clean environment, including a clean Yamuna, and housing to every slum dweller.

Neither the BJP nor the Congress have, as yet, named candidates against Mr Kejriwal.

The ruling AAP is seeking re-election in next month's polls after recording a massive win in 2015 elections; the party won 67 of 70 seats, with the remaining three going to the BJP and the Congress, which had been in power between 1998 and 2013, drawing a blank.

Delhi Assembly's term ends on February 22 and a new government must be in place before that date.

Voting will take place on February 8 and counting and declaration of results will happen February 11.

With input from IANS