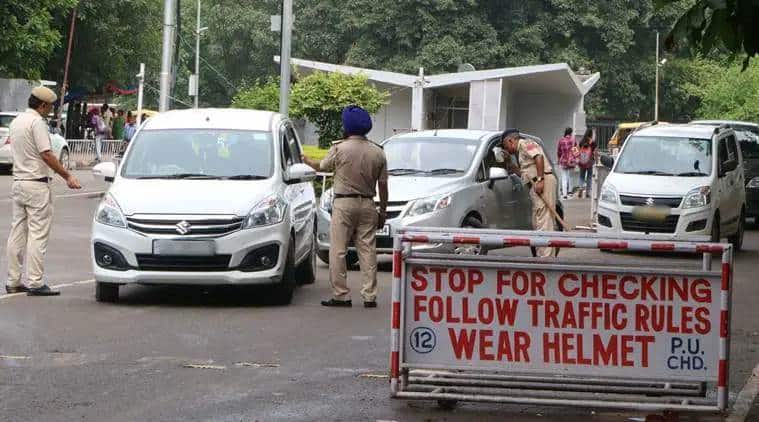 THE CHANDIGARH traffic police has urged the Central government to allow it to use at least 50 per cent of the total challan money collected from motorists every year.

On average, the Chandigarh traffic police challans around 2.50 lakh vehicles annually and collects around Rs 5 crore. In 2019, the traffic police had collected Rs 5.54 crore by challaning 2.62 lakh motor vehicles. The traffic police demands 50 per cent share of the total collected challan money for spending it on the welfare of UT traffic police personnel and upgrading its infrastructure of challaning machines and speed radars.

DSP (traffic) Kewal Krishan said, “We put a demand before Chandigarh Administration, which sent our letter to Ministry of Road Transport & Highways and now it is pending with MHA. So far, we deposited the challan money in the treasury of UT Administration. We are not entitled to use a single penny from the challan money. Recently, we were conveyed that MHA is shortly to take a decision on our proposal. If we get a green signal, it will work as a boost for UT traffic police. We are waiting for the final decision from MHA.”

Sources said there were indications that MHA might not agree on the 50 per cent share but might agree on a lesser limit. Originally, the demand was made before the UT Administration, which approved it and forwarded it to the Central government. The performance of UT traffic police in terms of challaning vehicles and collecting fine has been increasing every year.

The UT traffic police squad consists of around 460 traffic police personnel. Although it is equipped with modern gadgets, it needs more infrastructure. A traffic officer said, “There are a number of fields, which need more attention. Road safety field is one of the areas. We failed to bring down the number of fatal road accidents below 85 in 2019. To achieve the target of 75 in 2020, we need more infrastructure. We need money. At present, UT traffic police depends on the grant, which is given to Chandigarh police department through the UT finance department.”