All cases lodged against Rampur MP Azam Khan would be withdrawn if the Samajwadi Party comes to power, its president Akhilesh Yadav said on Saturday.

According to a statement issued by the party, Yadav made these remarks at Rampur, where he met Khan’s family at his residence and visited Mohammad Ali Jauhar University, Urdu Gate and Rampur Public School International.

He assured the party’s full support to Khan, who is facing several police cases including those related to alleged land-grabbing. Authorities claim that the gate of Mohammad Ali Jauhar University, established by Khan in 2006, is built on government land.

Addressing reporters in Rampur, Yadav said, “Once the Samajwadi Party is voted back to power in UP, all the cases lodged against senior SP leader and Rampur MP Azam Khan will be withdrawn.

“The relationship with Azam Khan is that of family, and not one related to politics,” the statement quoted him as having said.

He said that he would meet Governor Anandiben Patel in this regard, if necessary. “I will inform her about the atrocities unleashed by the administration. Copies of all the FIRs lodged against Khan will be taken, and a report compiled.” 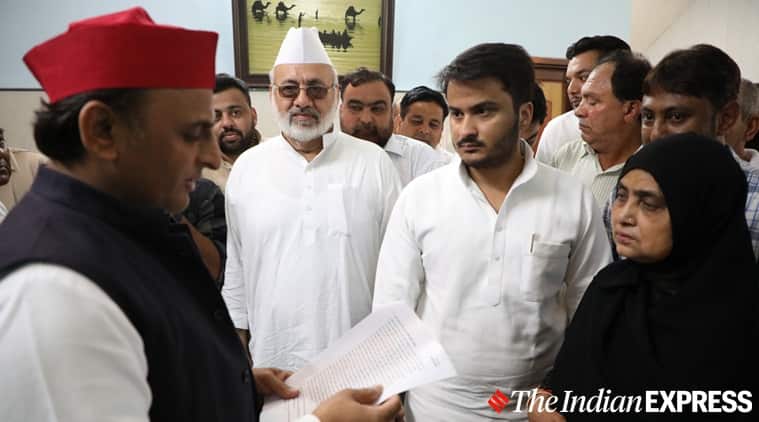 He showered praise on Khan. “He has established fine Ali Jauhar University. He has fulfilled his dreams, and has made this institution for the bright future of children.”

“Today, education has become very expensive and this university will help the youth from and around Rampur to get good quality education. Azam sahaab has done a good job of securing the future of the children,” he said.

Hitting out the BJP, the former chief minister said, “The BJP is indulging in politics of vendetta. It is diverting people’s attention from real issues.”

He said that after the Lok Sabha elections, people were hopeful that the government will usher in development, but it failed.

“The Defence Budget, which was meant for Defence Corridor, is going to foreign countries through Apache and Rafale. Make in India cannot be seen anywhere.”

Samajwadi Party workers accorded him a warm welcome at various places from Lucknow to Bareilly and Rampur, the party statement said.

On Friday, before leaving for Rampur, Yadav had said, “Our party leader MP Azam Khan is been targeted by the government. Over 80 cases have been lodged against him within a month. These cases include of goat and buffalo theft.”