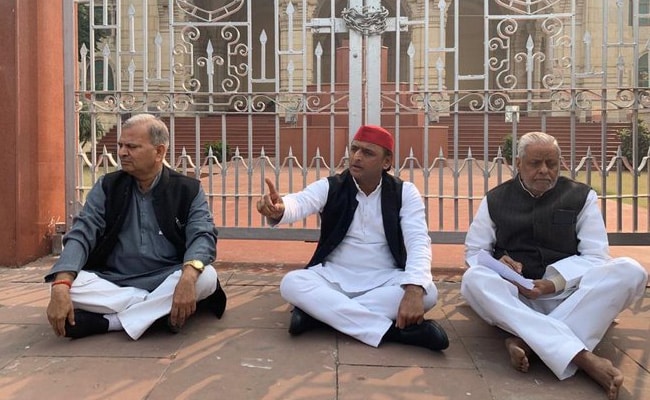 Former Uttar Pradesh chief minister Akhilesh Yadav today sat outside the state assembly in protest against crimes against women in the state. He demanded the resignation of Chief Minister Yogi Adityanath over the death of a 23-year-old woman from Unnao, who was allegedly raped and set on fire by the accused while she was on her way to a court hearing.

"Till the day Uttar Pradesh chief minister, state home secretary and DGP don't resign, justice will not be done. We will conduct a shokh sabha (condolence meet) in all districts of the state over the Unnao rape case," Mr Yadav told reporters.

The woman from Unnao, who suffered 90 per cent burn injuries, was airlifted to a hospital in Delhi on Thursday. She died of a cardiac arrest last night.

"This is an extremely condemnable incident. This is a black day. It is not the first such incident under this BJP government. The chief minister had said in this very assembly, 'apradhiyon ko thok diya jayega' (convicts will be shot), they could not save the life of a daughter," Mr Yadav said.

Earlier this week, he attacked the UP government for leading to a situation that was seen as a "worst phase" for women's safety in the state. "It is heart-wrenching to listen to the reports of rape, atrocities, and murder being committed against women from the state. This is the worst phase as far as the safety of the state's girls and women is concerned. Highly condemnable," Mr Yadav had tweeted in Hindi.

On Friday, Mr Yadav without directly referring to the Telangana Police killing all four accused in a rape-murder case had said he was "happy that someone has got justice". "Those running away from law... How far can they run from justice? I am happy that someone has got justice but real happiness will come when there will be effective preventive security arrangements and social atmosphere that such heinous crimes never happen with any sister or daughter," he tweeted.

When he was in power, Mr Yadav's government had also faced criticism from the opposition over alleged spiralling law and order in the state, with some leaders alleging there was a "jungle raj" in the state.

Calling the matter "extremely saddening", Mr Adityanath said a fast-track court will try the Unnao woman's case. "The case will be heard in a fast-track court and strictest of punishment will be given to the culprits," he said in a statement today.

The woman had told the police she was thrashed and stabbed before being set on fire near her village in Unnao by five men, including two she had accused of raping her and their fathers. She was on her way to a court hearing in her rape complaint when the men surrounded her near a railway station.

A report by news agency IANS said 86 rape cases have been reported from Unnao alone since January. Unnao, with a population of 31 lakh, is 63 km from state capital Lucknow.