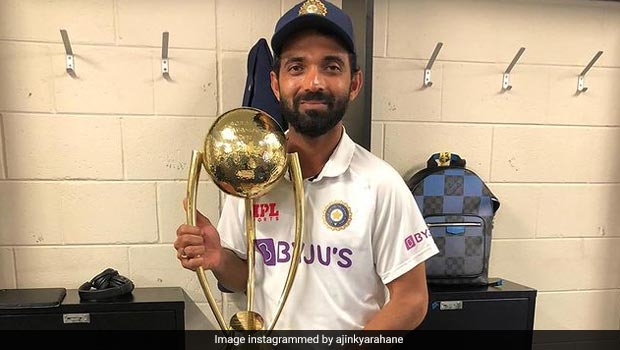 The Indian cricket team has made the country proud with an iconic win against Australia in the four-match test series. The victory was one to be celebrated, especially for Mumbai-born batsman Ajinkya Rahane. The skipper led the young Indian side towards victory while captain Virat Kohli was on paternity leave. Ajinkya Rahane received a grand welcome from fans and followers when he returned home from Australia. Many turned up to welcome Rahane home, showering flowers on him, his wife Radhika and their daughter. There were also two cakes made in honour of the cricketer, one of which was shaped like a Kangaroo. Take a look:

This was cake ordered for @ajinkyarahane88 by a guest wit my wife @LkAditi. A brilliant suggestion by Jitu & killer execution by Niketa
It captures d Essence of a victory of for which words r not enough but last Mein Kuch Meetha ho jaye#indvsaus#AUSvsIND#bordergavaskartrophypic.twitter.com/vkRrspcX6n

The picture of the cake was shared on Twitter by user Vishal Kamat. The delicious-looking cake was made with green coloured fondant, along with details such as wickets, grass and a red leather ball in order to make it look like a real cricket pitch. There was also a small photograph of Ajinkya Rahane on the cake. A cute little Kangaroo featured on top of the cake, holding the Indian flag to depict the country's recent victory in Australia. "Congratulations," read the text at the bottom.

According to reports, the cricketer denied cutting the cake out of respect to the Kangaroo - which is also Australia's national animal. The video of Ajinkya Rahane's refusal to cut the cake is now viral on YouTube.

There was a second cake which skipper Ajinkya Rahane cut at the office Mumbai Cricket Association. In a video shared on Twitter, the cricketer can be seen cutting the creamy cake topped with Butterscotch cream and chocolate. Take a look:

India skipper Ajinkya Rahane celebrates the victory Down Under with a cake presented to him by the Mumbai Cricket Association. @mid_daypic.twitter.com/9nSrHXKwlN— Harit Joshi (@Haritjoshi) January 21, 2021

The Indian Cricket team will next be facing England in a 4-match Test Series, of which the first two will be held in Chennai and the next two in Ahmedabad. The series begins on 5th February 2021.