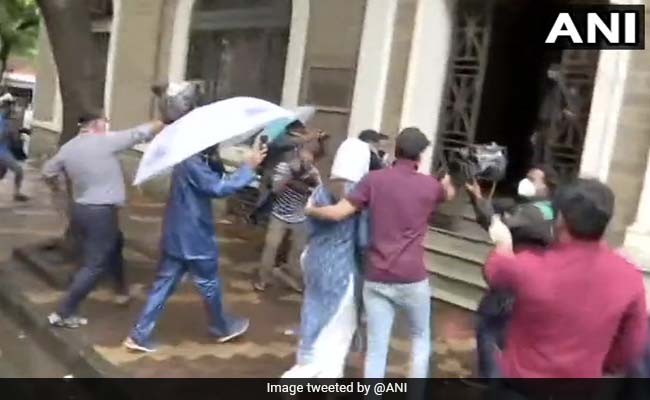 Rhea Chakraborty has been accused of a role in actor Sushant Singh Rajput's death by his family.

Rhea Chakraborty had asked for her questioning to be deferred citing an ongoing Supreme Court hearing on her petition.

"Rhea Chakraborty is a law abiding citizen. In view of the fact that Enforcement Directorate has informed the media that the request to postpone the attendance is rejected, she has appeared in the ED at the appointed time and date," Rhea Chakraborty's lawyer Satish Maneshinde said.

Rhea Chakraborty has been accused of a role in actor Sushant Singh Rajput's death by his family, which has alleged that she transferred money from his accounts and mentally harassed him. The Bollywood actor died by suicide on June 14, according to the Mumbai police. Sushant Singh Rajput's friend Siddharth Pithani and Rhea Chakraborty's former manager Shruti Modi have also been summoned by the agency, which investigates financial crimes.

The Enforcement Directorate wants to question Rhea Chakraborty in a money laundering case it has filed over what it calls "suspicious transactions" worth Rs 15 crore. The agency took note of a First Information Report or FIR by Bihar Police based on a complaint by Sushant Singh Rajput's family.

Sources in the agency claim money from two of the four bank accounts belonging to Sushant Singh Rajput was transferred to Rhea Chakraborty. But the amount is nowhere close to the alleged Rs 15 crore. Sources close to Rhea Chakraborty say some of the transactions were not unusual for any couple in a relationship, one that lived together and even went to holidays. Sources add that the two had also started a company together along with Rhea Chankraborty's family members.

The Supreme Court is hearing Rhea Chakraborty's petition to transfer the Bihar case to Maharashtra, where the Mumbai police has been investigating whether Sushant Singh Rajput was pushed to despair by Bollywood cliques and rivalries. The Mumbai Police has questioned over 50 people on allegations that the actor was suffering from depression and had felt sidelined in the film industry.

The Bihar Police's parallel probe against Rhea Chakraborty has sparked a turf war between cops in Patna and Mumbai.

On Wednesday, the centre handed over the Bihar Police case to the Central Bureau of Investigation (CBI) following demands from politicians and the actor's family.

A crack CBI unit that has investigated high-profile crimes like the Vijay Mallya case has taken charge of the case, naming Rhea Chakraborty among five accused.

Rhea Chakraborty, who has denied all charges, had called for a CBI probe earlier but said yesterday that the agency's investigation at this point will be "totally illegal and beyond any known legal principles, affecting the Federal Structure of the Nation."