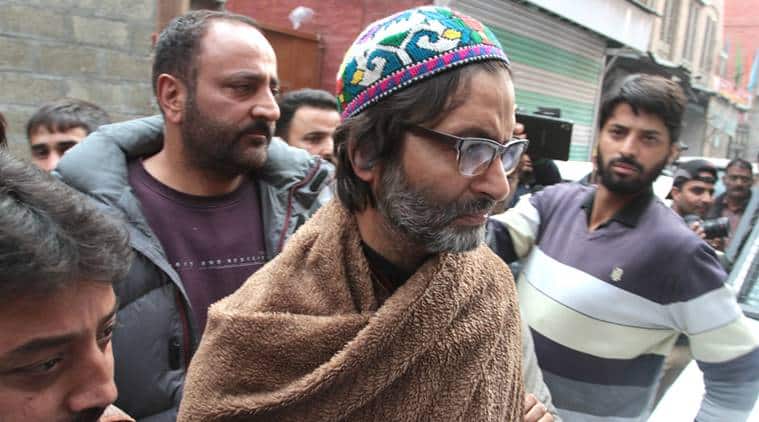 Weeks after banning the Jamaat-e-Islami, the Centre Friday announced that the Yasin Malik-led Jammu Kashmir Liberation Front (JKLF) has been banned as well for “promoting” secession of the militancy-hit state. The JKLF was banned under various provisions of the Unlawful Activities (Prevention) Act after a high-level meeting on security chaired by Prime Minister Narendra Modi.

Declaring the JKLF an unlawful organisation, Union Home Secretary Rajiv Gauba said: “The central government has today declared Jammu Kashmir Liberation Front (Yasin Malik faction) as an unlawful association under the provisions of Section 3(1) of the Unlawful Activities (Prevention) Act, 1967. This is in accordance with the policy of zero tolerance against terrorism followed by the government.”

Gauba said the JKLF has spearheaded separatist ideology in the Valley and has been at the forefront of separatist activities and violence since 1988. A Home Ministry statement said: “JKLF has many serious cases registered against it. This organisation is responsible for the murder of 4 Indian Air Force personnel and kidnapping of Dr Rubaiya Sayeed, daughter of the then Home Minister Mufti Mohammad Sayeed during the V P Singh Government.”

“This organisation is also responsible for illegal funnelling of funds for fomenting terrorism. JKLF is actively involved in raising of funds and its distribution to Hurriyat cadres and stone-pelters to fuel unrest in the Kashmir Valley as well as for subversive activities…The JKLF was involved in the killings of Kashmiri Pandits in 1989 leading to their exodus from the Valley.”

In a notification, the Home Ministry stated that the activities of JKLF (Y) pose a serious threat to the security of the country and are prejudicial to the territorial integrity and sovereignty of India.

Calling the ban a “detrimental step”, former J&K Chief Minister Mehbooba Mufti tweeted, “Yasin Malik renounced violence as a way of resolving J&K issue a long time ago. He was treated as a stakeholder in a dialogue initiated by then PM Vajpayee ji. What will a ban on his organisation achieve? Detrimental steps like these will only turn Kash into an open-air prison.”

National Conference leader Omar Abdullah also criticised the decision and said: “For 4 1/2 years Yasin Malik isn’t a threat, Jamaat Islami isn’t a threat, Pakistan National Day is a function that must be attended. Now suddenly once an election is announced an immediate u-turn is executed.”

Malik is currently lodged in Kot Balwal jail in Jammu and is likely to face trial in the three-decade-old case of kidnapping of Rubaiya Sayeed. JKLF is part of the Joint Resistance Leadership which includes S A S Geelani led Hurriyat Conference. JKLF was the first outfit to pick up arms in the Valley but denounced it’s activities and later joined the dialogue process in 2000 with the Centre.

The notification issued by MHA banning JKLF said the organisation is involved in anti-national and subversive activities intended to disrupt the sovereignty and territorial integrity of India; “JKLF-Y is in close touch with militant outfits and is supporting extremism and militancy in J&K and elsewhere,” it said.