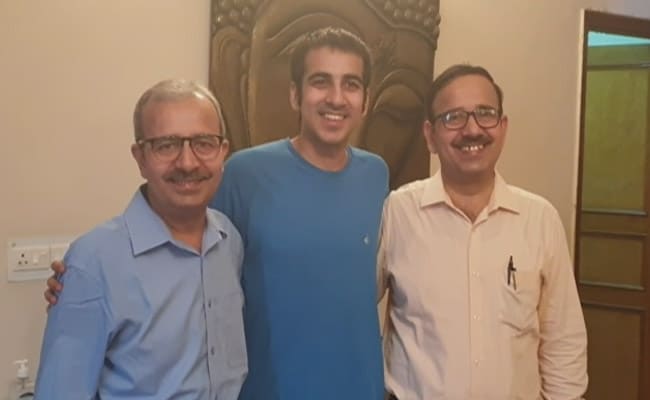 The family is now trying to save the lives of others suffering from COVID-19.

For the Nagpal family in Haryana's Faridabad, bordering Delhi, the world came crashing down when six of their family members tested positive for COVID-19 in the first week of June. Within a span of five days, the family first lost its patriarch, 84-year-old Prithviraj Nagpal, and then his wife, 78-year-old Kaushal.

The family, including the late couple's sons - 54-year-old Subhash and 51-year-old Gajendra - could not even say goodbye or perform the last rites as they too were suffering with COVID-19.

Despite their loss, the family is now trying to save the lives of others suffering from the highly contagious disease.

Yesterday, Subhash Nagpal, on the occasion of his birthday, donated plasma at Institute of Liver and Biliary Sciences (ILBS) hospital's Plasma Bank in Delhi's Vasant Kunj.

"It was a coincidence that I finished 14 days of COVID recovery on my birthday. I could not save my own mother but I hope I can save someone else's mother. On my birthday, there could have been nothing better than this for me and my parents.I understand the difficulty of trying to get a plasma donor. We struggled for three days to get AB blood group plasma for my mother. Doctors told me that only less than 10 per cent of people have this blood group. Since my own blood group is AB, I thought I should be the first person to go and donate. It would be the best tribute to my parents," Mr Nagpal told.

Mr Nagpal added that his father passed away on June 9. At that point, his mother was still at a COVID ward in a hospital and the family didn't tell her about his death, fearing it would make her situation worse. They hoped that once she recovered, they would tell her. But, she passed away five days later.

Mr Nagpal's 47-year-old sister-in-law, Sonia Nagpal, was the only person in the family who didn't catch the infection. And, as the rest of the family battled the virus, she took care of the elderly couple in the hospital during their last moments.

"It was the most difficult time. When six people in a family test positive, you can imagine how we must have been treated like pariahs. Only a few relatives and our next door neighbour came to the funeral," she said.

Mr Nagpal added that his mother was a jovial person and went out of her way to help people out. He regretted that her cremation had to be in such circumstances, "She was a favourite among both friends and family. If things had been normal, thousands would have turned up to bid her adieu," he said.

As Mr Nagpal will go to donate plasma again after 14 days, he will be joined by three other survivors in the family, including his 21-year-old nephew.

"Our family had a tough time. I also got inspired by my uncle. My message to others is that be responsible. If you are a COVID patient, do not go out and take all precautions. For those who have recovered please go and donate plasma because a lot of people need it. When we unite against COVID-19, only then we will be able to defeat it," Mr Nagpal's nephew Abhijit told.