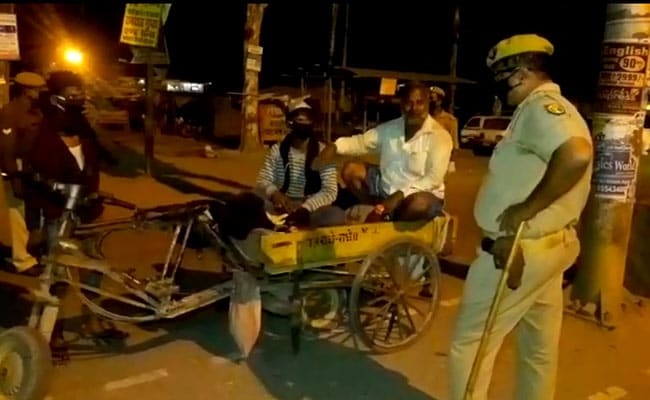 Cops are seen asking men if they wanted to rest for some time after the 800-km journey.

Amid a nationwide lockdown over coronavirus pandemic, migrant labourers across the country have one common worry: how to reach home. Three days into the "total lockdown" - announced by Prime Minister Narendra Modi on Tuesday - numerous heartbreaking stories have emerged of many of these migrants trying to cover hundreds of kilometres on foot.

An incredible story has come across from Uttar Pradesh's Chandauli district - bordering Bihar - of a group of three workers from Delhi who live in Bihar's Madhubani. They rigged an old scooter's engine to a pushcart to make their 1,200-km long journey from the national capital to their home easy.

Last night, when these men - Lalu Mahto , Gore Lal Mahto and one of their family members - were on a highway in Chandauli - about 330 km from Lucknow - they were given food by district adminstration, passes by UP cops to continue their journey unhindered.

They decided to leave the national capital on Tuesday, the cops were told, as they had no food and money after interstate buses were cancelled, borders were sealed and a national lockdown was announced by Prime Minister Narendra Modi over COVID-19.

In the clips, shot on mobile phones, policemen are seen asking men if they wanted to rest for some time after covering a distance of 800 km. "No we are not tired. We just want to carry on. Please could you let us pass," one of the men is heard telling a policeman.

"Whatever money we had, we have finished. There was no other way (to travel). So we decided to decided to use this makeshift vehicle. We will finish the journey in three days, perhaps four.... but we will reach," Lalu Mahto later told reporters.

This is an incredible ( for want of a better expression )#Lockdown21 story . Lalu mahto , gore lal mahto and a relative are from madhubani in bihar . They work in delhi . On tuesday , they made up their mind to leave delhi.... pic.twitter.com/mc9EuG1Rug

According to the district administration in Chandauli, the men were given food, issued passes for unhindered travel and a medical check-up was also conducted.

The compassionate response from the officials in the district came hours after police chief in Badaun - a town in UP about 600 km away - apologised over a video where a policeman is seen punishing some men, reportedly migrants trying to reach home.

The men were caught by the cops, who refused to listen to their pleas, and humiliated by being made to hop and crawl in this heat. "The policeman seen in the video is a probationer with about a year of experience. Senior officers were present but manning other spots. Corrective action will be taken. I apologise for the video and am ashamed about what happened," AK Tripathi, the Budaun police chief, said.

Late last night, Chief Minister Yogi Adityanath issued directions asking police and the administration to behave in a humane manner with those returning home and the provide them food and facilities.