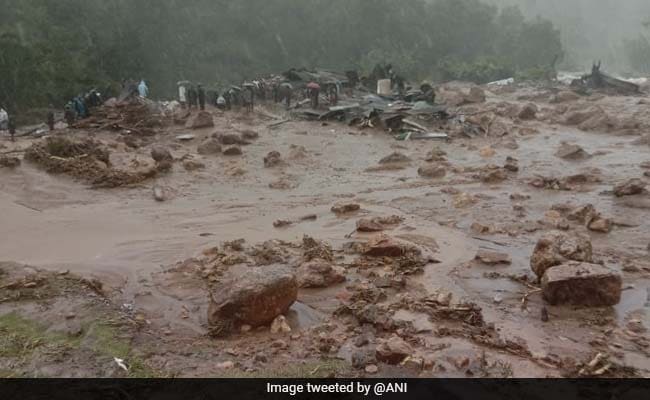 Heavy rain caused a landslide in Kerala's Idukki district early Friday morning. Officials say the landslide happened in the Rajamalai area of the district, which is around 25 km from the tourist town of Munnar.

Between 70 and 80 people lived in the area, officials have said, adding that they do not know, at this point, how many are trapped under the mud.

Taluk officials have said that a connecting bridge was swept away yesterday, making access to the area difficult. Rescue teams have also been slowed down by tough terrain.

Initial reports from local revenue officials, at around 11.30 AM, suggest that five people have died. Ten others have been rescued so far.

Forest officials and other emergency services personnel have reached the spot. The Chief Minister's Office has sought assistance from IAF helicopters for help with rescue efforts.

Chief Minister Pinarayi Vijayan also tweeted that an NDRF team had been deployed, with a second team - based in nearby Thrissur - also on its way.

"An NDRF team has been deployed to rescue landslide victims in Rajamalai, Idukki. Police, Fire Force, Forest & Revenue officials have been instructed to join rescue efforts. Another team of NDRF, based in Thrissur, will soon reach Idukki," the Chief Minister said.

An NDRF team has been deployed to rescue the landslide victims in Rajamalai, Idukki.Police, Fire Force, Forest & Revenue officials have been instructed to join the rescue efforts.Another team of NDRF, based in Thrissur, will soon reach Idukki.#KeralaRains

Health Minister KK Shailaja has said that a mobile medical team and 15 ambulances have been sent to Idukki, with more ready to be sent if needed. The Health Minister has also directed more hospitals to be ready to treat survivors.

On Thursday heavy rains caused a temporary bridge in the district to collapse, state authorities said. The entire district was on red alert for likely extremely heavy rainfall today.

The district also saw floods in low-lying areas like Munnar, which is a popular tourist destination near Rajamalai, because of rising water levels of a nearby river.

Night travel has been banned in Idukki district, the state disaster management authority was quoted by news agency PTI, adding that several roads and highways had been closed due to rains.