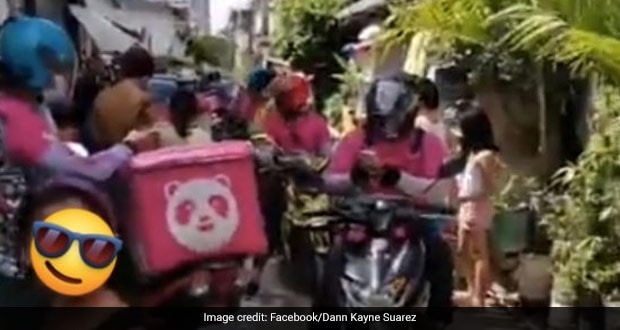 People who thrive on food delivery apps also have to make peace with common glitches like payment issues, tracking, late delivery etc, but have you ever ordered one meal and opened door to 42 of them instead? That's exactly what happened to a seven-year old Filipino girl, who simply tried ordering lunch for her grandmother and herself. The order of two boxes of fried chicken fillets with rice, brought an entire street of Barangay Mabolo on hold when they saw more than 40 riders, each carrying a parcel of the same order.

The little girl in Cebu city placed the order with great difficulty due to slow internet, little did she know that her order would become the talk of the town soon.

(Also Read: Man Tips USD 3,000 To Restaurant Amid Covid - All He Ordered Was A Beer)

Danne Kayne Suarez, who went live on Facebook to capture the hilarious episode, explained that it happened due to an app glitch. Apparently, the girl repeatedly tapped on her order when it wasn't going through, only to see 42 food delivery executive from Food Panda lining outside of her door within minutes of each other, carrying the exact same order.

Upon realising her error, the little girl got too nervous. The bill amounted to a whopping PHP 7945 instead of PHP 189. To help out the little girl and her grandma, the neighbours volunteered to buy the extra packets. Dannny said in his caption that going live actually helped find more buyers.