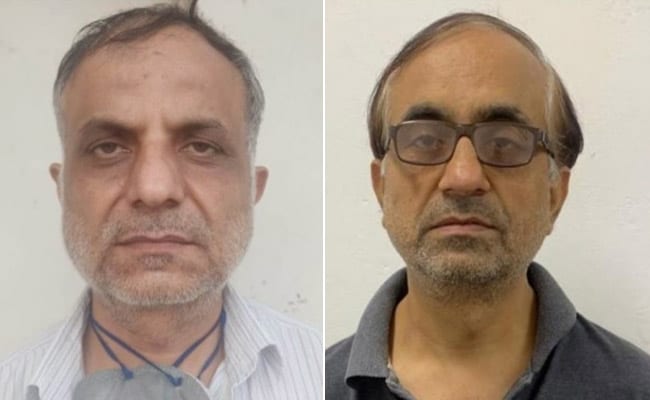 Ashwani Arora (L) and Vijay Arora along with their wives were arrested from Ghaziabad and Delhi.

Four members of a family have been arrested for allegedly duping several banks of over Rs 20 crore by forging documents and fraudulently availing loans by mortgaging same properties multiple times, the police said today.

In one such case, the accused availed loan on a property which was already acquired by the Delhi Metro Rail Corporation, they said.

Ashwani Arora and Vijay Arora along with their wives, who were missing for nearly four years, were arrested from different places in Ghaziabad and Delhi after the Economic Offences Wing (EOW) of the Delhi Police conducted simultaneous raids in connection with a 2016 case of bank fraud, they said.

The matter came to light after a complaint was received in 2016 from Zonal Manager of Punjab and Sind Bank, in west Delhi's Nariana, the police said.

In the complaint, the bank alleged that M/s Riya Enterprises availed ODP (Overdraft against Property) limit of up to 70 lakhs.

This limit was released against the equitable mortgage of a property on GT Road, Shahdara, which was in the name of Ashwani Kumar who was also the guarantor in this loan. These limits were granted by Punjab and Sind Bank in Karol Bagh.

Similarly, over the years since 2011, the accused availed ODP amounting to several lakhs from the complainant bank on behalf of their created firms by mortgaging properties, the police said.

The bank also alleged that the properties were already mortgaged with other banks, a senior police officer said.

Based on the complaint, a case was registered and investigation was taken up, he said.

Joint Commissioner of Police (EOW) Dr OP Mishra said during the investigation, it emerged that all the accused prepared forged chain of property papers, on the basis of which, they succeeded in getting the property registered fraudulently before the Registrar Office either in their name or in the name of other persons.

"On the basis of these forged documents, they availed loans multiple times on same property from many banks. Using the same modus operandi, they succeeded in availing loan from the complainant bank," Mr Mishra said.

"After some time, they stopped paying interest and duped them of Rs 6 crore. During investigation, it was found that the accused not only multi-mortgaged the properties but also availed loan on a property which was already acquired by the Delhi Metro Rail Corporation," he added.

So far, it has emerged that the accused have duped at least five banks for more than Rs 20 crore, he added.

The official said the accused formed firms and created alibi for taking loans. Thereafter, they created multiple sets of documents of the same properties and on the basis of this, they availed loan from various banks. They created multiple identities by changing their names and parentage, he added.