244 To 0 Kmph In 2 Seconds: How Tejas Jet Will Land On Aircraft Carrier 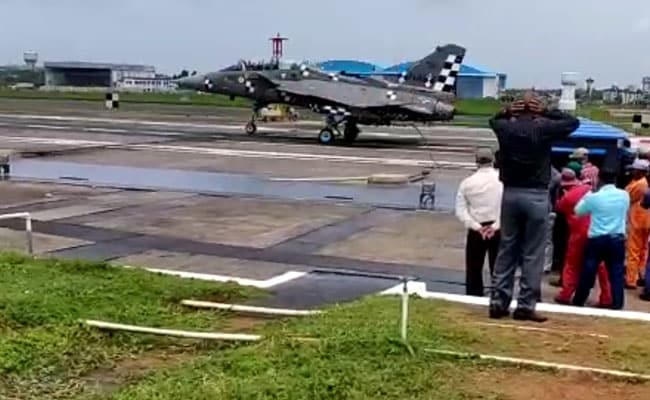 The naval variant of the homemade Light Combat Aircraft (LCA) Tejas became the first aircraft in India to successfully perform an "arrested landing", in what is being billed as a major step in the programme to make the jet ready for service with the Navy.

In about two seconds, the Tejas-N decelerated from 244 kilometres per hour (132 knots) to standstill by snagging the wire on the test runway with the hook attached to the jet's fuselage. It took just 87 metres for the jet to come to full halt during today's test at the Goa's Shore-Based Test Facility. This is what the Tejas-N will need to replicate out at sea when it eventually attempts to land on the deck of India's only operational aircraft carrier, INS Vikramaditya.

However, the carrier will be moving, not stationary and the pilot will need to visually adjust to the ship's rolling and pitching deck before touching down hard within the landing zone on the deck of the carrier in order to snag an arresting wire to almost instantly slow down.

An "arrested landing" on the deck of an aircraft carrier is a feat achieved by only a handful of fighter jets developed in the US, Russia, the UK, France and, more recently, China.

Achieving this successfully, over and over again at the test facility in Goa, will validate one of the most important design features on the LCA-N - its ability to handle the incredible stresses of making an "arrested landing" on the deck of an aircraft carrier.

It is only once the shore tests are successful that naval test pilots leading the development effort on the LCA-N prototypes can graduate to the next step - making an actual landing on INS Vikramaditya.

Key members of the LCA-N development team whom NDTV has spoken to say they have flown 60 sorties in May-June at the Goa test facility. To eventually make an approach onto the deck of INS Vikramaditya, LCA-N engineers and pilots need to be confident that the fighter can slam down onto the deck of a carrier at a 'sink rate' (rate of descent) of approximately 7.5 metres per second (1,500 feet per minute) without being damaged.

Engineers and pilots in the project are certain that they are on track to meet their landing certification target.

One of the major technical concerns that could impact the development of the LCA-N is that the arrestor gear on INS Vikramaditya, the mechanical system used to rapidly slow down an aircraft as it lands, has key design differences from the gear installed at the test facility in Goa.

Key members of the LCA-N project team are hopeful that this does not impact the project but they will not be certain until they actually land on the ship.