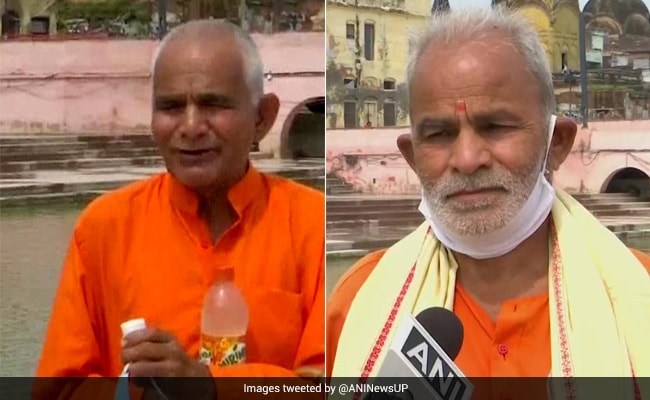 Two brothers aged over 70-year-old carried water from more than 150 rivers to Ayodhya on Sunday, ahead of the Ram Temple bhoomi poojan which is scheduled on August 5.

The two brothers -- Radhey Shyam Pandey and Shabd Vaigyanik Mahakavi Triphala have been collecting water from eight rivers, three seas, and soils from sixteen places of Sri Lanka since 1968.

"It has always been my dream that whenever the Ram Temple gets constructed, I would collect the holy water from rivers across India and soil from Sri Lanka. And with Shri Ram's grace, that goal has been achieved. we have collected water from 151 rivers, 8 big rivers, 3 seas and soil from 16 places of Sri Lanka," Radhey Shyam Pandey, one of the brothers told ANI.

"From 1968 to 2019, I have gone by foot, cycle, motorcycle, train, and airplane to collect the elements. I wanted to present the water from the rivers to the birthplace of Ramji," he added.

Prime Minister Narendra Modi is scheduled to lay the foundation stone of the Ram temple in Ayodhya on August 5.

The construction of Ram temple in Ayodhya will begin after the ceremony to lay the foundation stone in which chief ministers of several states, ministers from the Union Cabinet and RSS chief Mohan Bhagwat, among others are also likely to participate.

The Supreme Court had on November 9 last year directed the Central government to hand over the site at Ayodhya for the construction of Ram temple.