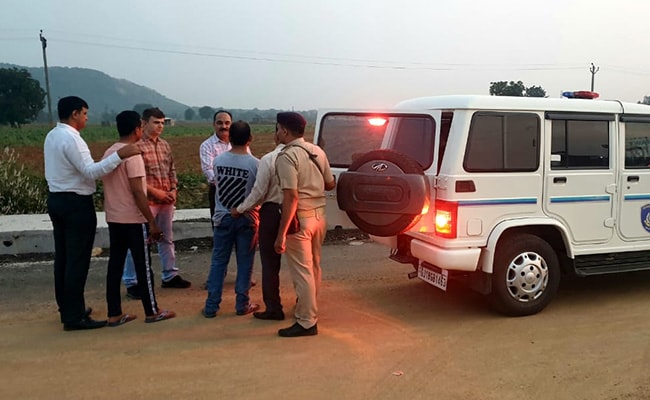 Four days after the murder of Hindu Samaj Party leader Kamlesh Tiwari in Lucknow, the anti-terrorism squad of the Gujarat police today arrested his two alleged killers from a location near the state's border with Rajasthan. This has taken the total number of people arrested in the case to eight.

According to police, the accused - Ashfaq Hussain (34) and Moinuddin Pathan (27) - killed the Hindu group leader to avenge certain statements against Prophet Mohammad that he had purportedly made in the past.

The two accused - one of whom was wearing a saffron kurta - met Kamlesh Tiwari at his Lucknow residence on October 18 on the pretext of gifting Diwali sweets and discussing political matters. However, once inside his home, the accused allegedly slit his throat and shot him before escaping. The victim died despite being rushed to a hospital.

Security camera footage recovered later showed the two accused walking up to Kamlesh Tiwari's residence with a box of sweets. The box - which bore an address from Gujarat's Surat - was found at the spot of the murder. The two also checked into a Lucknow hotel on Thursday night, hours before allegedly committing the crime, and registered themselves under their actual names and addresses. Police said they returned to their hotel room to dump their clothes and weapons before leaving the city.

The two accused were last spotted on CCTV footage collected from a location close to the Shahjahanpur bus station, around 170 km from Lucknow.

"Pressure from the police was the main reason the two accused ended up running from one place to another, be it Bareilly or Shahjahanpur. They weren't able to stay at one place for more than two to four hours, and they couldn't use any electronic devices either," Uttar Pradesh Director General of Police OP Singh said.

The Gujarat anti-terrorism squad said that the two accused - both residents of Surat - escaped to the western state after killing the Hindu leader. "Once their money dried up, the accused called their family members and acquaintances in Surat for assistance. But those close to the two had already been placed under surveillance, and based on that, they were apprehended from the Gujarat-Rajasthan border near Shamlaji," a statement released by the state police read.

Shortly after Kamlesh Tiwari's murder, police had arrested five people from different parts of the country. While three - Maulana Mohsin Sheikh, Rasheed Ahmed Pathan and Faizan - were picked up from Gujarat in a joint operation with the Uttar Pradesh police, two Muslim clerics named in an FIR by the Hindu group leader's wife were arrested in western Uttar Pradesh's Bijnor district. A sixth accused - Sayyed Asim Ali - was arrested from Nagpur on Monday night on the basis of specific inputs.

Sayyem Asim Ali had allegedly been in contact with some of the accused in the case.