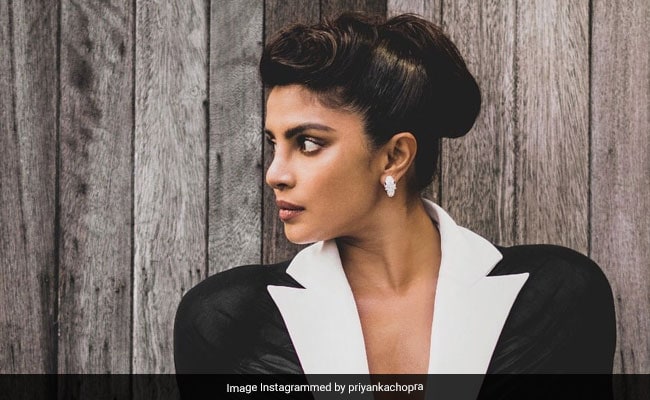 Global icon Priyanka Chopra, who sports many hats, is currently in London and hosted a virtual fashion event - The Fashion Awards 2020. Priyanka Chopra, who is also a UNICEF Goodwill Ambassador, tech-investor and promotes local, sustainable fashion, is the British Fashion Council's new Ambassador for Positive Change. Priyanka shared just a glimpse of her look for the virtual event and revealed what made her pick Bengaluru-born and London-based designer Kaushik Valendra's creation for the event. "One of my priorities as the BFC Ambassador for Positive Change is to celebrate the extraordinary talent of South Asian designers. Tonight I'm wearing Kaushik Valendra, a South Asian born designer who is breaking stereotypes, pushing for more sustainable fashion, and changing the way South Asians in the industry are perceived," she wrote.

Even though there was no red carpet, Priyanka Chopra impressed the fashion police in a monochrome look - a pant suit with exaggerated shoulders. She accessorized with some sparkling earrings and a glittering hand harness.

In a video message, Priyanka Chopra detailed what The Fashion Awards 2020 was all about. It honoured talents for their positive impact on "Community, Creativity, Environment and People" with the creations. Actress Maisie Williams was also a co-host for the virtual awards.

Priyanka Chopra recently announced a new Hollywood movie tentatively titled Text For You, which is the English remake of German-language 2016 movie SMS Fur Dich. Priyanka co-stars with Celine Dion and actor Sam Heughan in the film. Her impressive list of upcoming projects also include Netflix films The White Tiger and We Can Be Heroes, Russo Brother's Citadel and a film with actress-comedian Mindy Kaling. Priyanka has also been reportedly roped in as part of the cast of Matrix 4.