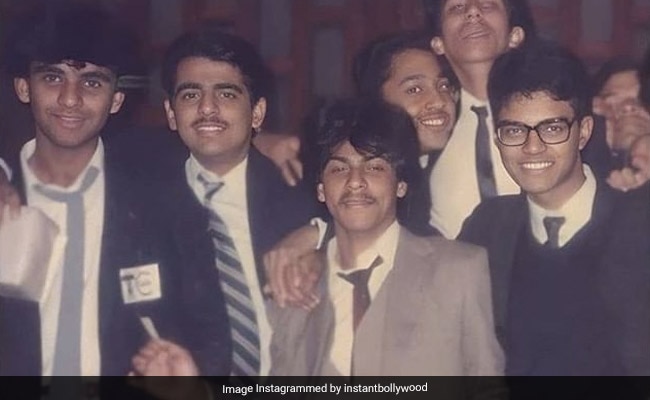 Shah Rukh Khan in a blast from the past (courtesy instantbollywood)

Every so often, throwback photos of Shah Rukh Khan find their way to the Internet and this story is about one such blast from the past. Shah Rukh Khan, who began his career as an actor with Fauji in 1988, attended St. Columba's School in New Delhi. An old photo of the actor, which appears to be from his teenage days, has been doing the rounds on the Internet. In the photo, Shah Rukh can be seen posing with who seem to be his classmates. A much, much younger version of Shah Rukh sports a moustachioed look and messy hair in the photo as he can be seen hanging out with his friends. Can you spot Shah Rukh in this photo? That's him in a grey suit.

Guess the superstar in this throwback picture

After passing out from school, Shah Rukh graduated from Delhi's Hansraj college. He started attending Mass Communication classes at Jamia Millia Islamia for post graduation but left his course mid-way to make a career as an actor. He also attended National School Of Drama during his initial days as an actor. After several theatre performances, Shah Rukh's first on screen acting project was TV show Fauji, which made him a household name. He then also starred in popular shows such as Circus and Doosra Keval before finally making his Bollywood debut in 1992 film Deewana.

A year before his Bollywood debut, Shah Rukh got married to Gauri Khan. The couple are parents to three kids - Suhana, 20, Aryan, 22, and AbRam, who turned 7 today. Shah Rukh Khan, who was last seen in Zero, has a few production projects lined-up. His Red Chillies Entertainment recently produced Kaamyaab and will next be releasing Bob Biswas, starring Abhishek Bachchan.