Twinkle Khanna's 'Six Cows' Joke Is Cracking Up The Internet 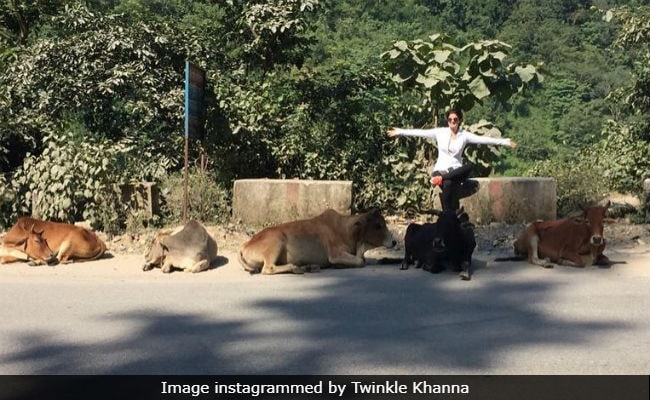 Twinkle Khanna is currently on a vacation with her sister Rinke Khanna and friend Karishma Bedi and her latest post from a road trip - featuring six cows (we're getting there) - is cracking up the Internet. Twinkle shared a picture of herself sitting on the roadside where a few cows were also resting and she wrote, "Six cows sitting together, some more sacred than others #TravelDiaries." Carefully look at the picture and you'll get the joke. In the comments thread, Dia Mirza and Tahira Kashyap posted ROFL emoticons, like many members of Twinkle's 4.9 million plus Instafam. "Oh dear," wrote an Instagram user along with several LOL emoticons while another added, "Cows too just wanna have fun... mooohhh."

Six cows sitting together, some more sacred than others :) #TravelDiaries

On Tuesday, Twinkle Khanna had shared a picture from her river rafting expedition with Rinke and Karishma Bedi. She wrote, "A morning that began in Mumbai's humid armpit and ended here, halfway down a river, where everything was drenched and nothing dampened. #TheThreeMusketeers."

A morning that began in Mumbai's humid armpit and ended here,halfway down a river, where everything was drenched and nothing dampened. #TheThreeMusketeers

Twinkle Khanna is vacationing close to Mumbai city and we're waiting for more pictures from her travel diaries.

Twinkle Khanna is the daughter of Rajesh Khanna and Dimple Kapadia and like her parents she also started her career as an actor. She debuted with 1995 film Barsaat opposite Bobby Deol and she went on to star in films like Jab Pyaar Kisise Hota Hai with Salman Khan, Baadshah opposite Shah Rukh Khan and Mela co-starring Aamir Khan. She quit films after Love Ke Liye Kuch Bhi Karega, which released in 2001.

Now, Twinkle Khanna is the bestselling author of three books - Mrs FunnyBones, The Legend Of Lakshmi Prasad and Pyjamas Are Forgiving. She is also a humour columnist and a film producer.

Twinkle Khanna is married to Actor Akshay Kumar and they are parents to son Aarav and daughter Nitara.