Taapsee Pannu Didn't Say 'All Men Are A**h**es', She Was 'Falsely Quoted' 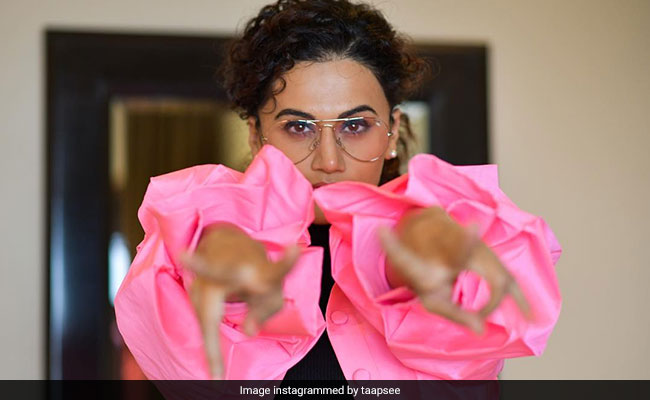 Actress Taapsee Pannu called out TV channel Colors Infinity on Twitter for "falsely quoting" her in what appears to be certain press releases issued to the media. The 31-year-old actress, who recently shot for an episode of Colors Infinity show BFFs With Vogue, has been trending for several reports published by websites like India Today, Mumbai Mirror and Hindustan Times, reporting that she said: "All men are a**h**es but Vicky Kaushal is the best" during a 'Hook, Marry or Kill' segment of the show. Taapsee dismissed the reports in her tweet and slammed the both Colors Infinity and parent channel Colors in stern words as she said: "I wonder what's the desperation of the PR of the media channel to get views and TRPs that they have to resort to not misquoting but actually quoting me falsely!"

Tagging the TV channels, Taapsee wrote: "It will be fun if you can show in your show when exactly I said this. #NotCool #CheapStunt." Joining Taapsee Pannu on Neha Dhupia's show was her Manmarziyaan co-star Vicky Kaushal.

I wonder what's the desperation of the PR of the media channel to get views and TRPs that they have to resort to, not misquoting but actually quoting me falsely! @ColorsTV@colors_infinity it will be fun if u can show in your show when exactly I said this. #NotCool#CheapStuntpic.twitter.com/XofpcntaxS

Several promos of the episode, scheduled for this Saturday, have also been shared on social media but none of them feature glimpses of the 'Hook, Marry or Kill' segment. In one the teasers, Taapsee talks about what she thinks is "annoying" about having a friend like Vicky Kaushal - she says it's his nocturnal nature.

In another teaser, Taapsee and Vicky can be having a blast on the show.

Our next episode is going to be #LUL - Loads of unfiltered laughter! Get ready to enter this crazy house with @taapsee and @vickykaushal09 on Season 3 of #BFFsWithVogue, Saturday at 9 PM!

Taapsee Pannu and Vicky Kaushal co-starred for the first time in Anurag Kashyap's Manmarziyaan, which also starred Abhishek Bachchan. The film was critically acclaimed by critics and viewers alike.