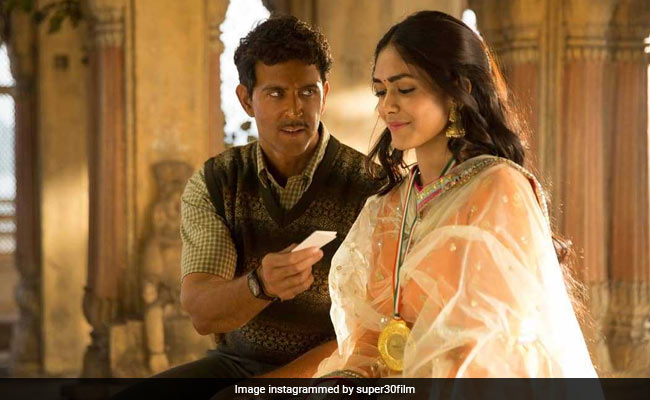 The first song from Hrithik Roshan's Super 30, titled Jugraafiya released on Saturday evening and we bet you'll be compelled to listen to it on a loop. The song showcases Aanand Kumar (played by Hrithik Roshan)'s love story. The two-and-a-half minute video also features Mrunal Thakur as Anand Kumar's love interest. The video highlights the romantic facet of Anand Kumar's teenage years. The song has a hint of old school romance. Young Anand is clearly smitten and he chances upon every opportunity get a mere glimpse of his beloved.

Jugraafiya has been composed by Ajay Atul. The song has been sung by Udit Narayan and Shreya Ghoshal and the soulful lyrics are by Amitabh Bhattacharya. Check out the song here:

Super 30 has been directed by Vikas Bahl and it has been collaboratively produced by Nadiadwala Grandson Entertainment, Phantom Films and Reliance Entertainment.

The film is based on the life of mathematician Anand Kumar, who coaches students from economically weaker sections for the entrance exams of the IITs. Besides Hrithik Roshan and Mrunal Thakur, the film also features with Pankaj Tripathi, Nandish Singh and Amit Sadh in pivotal roles.

Motorola Edge + Unboxing And First Impressions ⚡⚡⚡ Better Than Other Flagships?