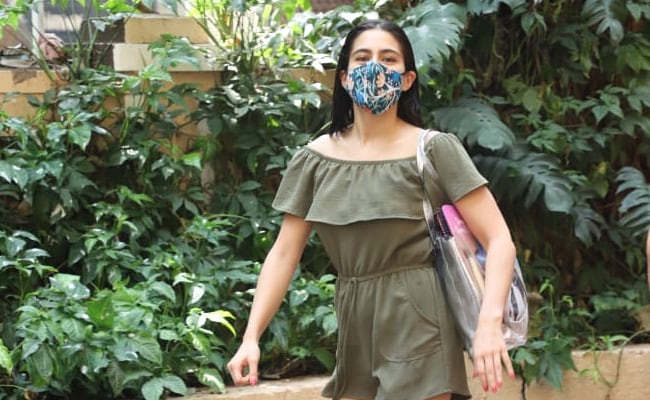 Sara Ali Khan, who is frequently photographed at her gym, was spotted on Wednesday afternoon as well. The actress, who is often seen interacting with the paparazzi, began trending courtesy a video which surfaced on social media. The now-viral video has been shared by several fan pages dedicated to the actress. Sara Ali Khan, who was seen walking out of her gym, stopped for a photo-op session of sorts, where she was asked by one of the photographers to get rid of the mask. Sara Ali Khan walked towards her car and told the paparazzo, "Mask nahi hataenge (won't remove the mask).

Earlier this month, Sara Ali Khan went on a vacation to Maldives along with her brother Ibrahim Ali Khan, and their mother and Bollywood veteran Amrita Singh. See some of the photos that the actress shared from her holiday on her Instagram profile:

The actress was last seen in the Coolie No 1 remake, alongside Varun Dhawan, which released on OTT platform Amazon Prime Video on Christmas. Sara's upcoming project includes Atrangi Re, co-starring Akshay Kumar and Dhanush.