Python, On TV Antenna, Eats Bird. Viral Video Will Give You The Chills 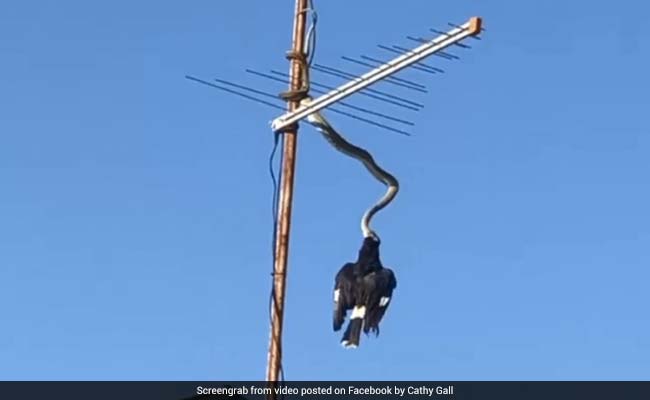 A homeowner was recently left horrified to see the scene being played out on her roof. Footage shared by Cathy Gall on Facebook shows a huge carpet python devouring a currawong while wrapped around a TV antenna. Cathy captured the video on the roof of her home in Kingscliff, Australia, on Wednesday morning. After she posted it to a Facebook group called Kingscliff Happenings, the video quickly went viral.

She says it took the snake an hour and a half to eat the bird, and captioned the video "Never seen this before...python trying to eat a currawong on our antenna..." while posting it online.

You can watch the video below:

Since being shared online, the video has collected over 1,000 'shares' and a ton of shocked comments.

"Oh that's awful," wrote one person in response to the viral clip. "This is so Australian," another commented. "Unbelievable," a third said.

Last year, a Burmese python in Florida went viral for eating a deer heavier than itself.